Share All sharing options for: Ducks Gameday -- A Case for Firing Randy

From the OC Register blog:

Incensed after another couple of lackluster performances in losses this past weekend, Ducks general manager Bob Murray took his team to task and said that blaming coach Randy Carlyle for their current struggles is an "excuse."

Murray has rebuffed calls or suggestions for Carlyle’s firing in the past and this time was no different after he spoke with the Register on Monday, following the team’s home loss to lowly New Jersey on Friday and its blowout defeat at San Jose on Saturday.

"I’ve got total faith in Randy," Murray said.  "He’s won a Stanley Cup.  That’s not an issue here.  It’s up to the players.  Enough excuses.  Talking about coaches and things gives them an excuse when they have no excuses in my eye."

Arthur at AC has more here, and here of course is Spade's fanpost (EDIT: and now Rudy Kelly at SBN LA, too!).  Now I'm not a guy who has much in the way of "better suggestions" for coaching names or strategies, but I can't buy into Barstool Bob's notion that results are completely independent from the head coach and his job description.  If it's Randy's job to have his team prepared to play on opening night, if it's Randy's job to have his players in positions to succeed, if it's Randy's job to get his awful team to improve -- these aren't areas where Carlyle has given us much to bank on this season, despite some significant changes in personnel from last season (which was also mostly miserable).

But of course the inability to win is clearly not Randy's fault, as further evidenced in this cartoon: 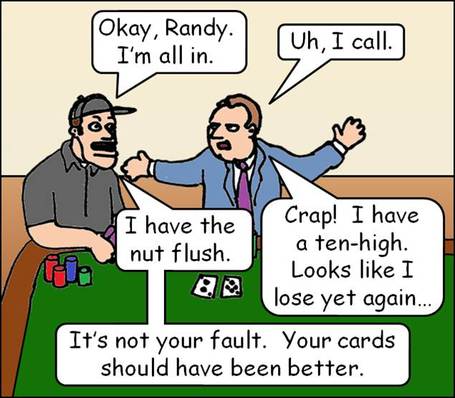 BTW, has anybody seen my usual drawing pen?

Currently, the Ducks have picked up 4 wins and 9 standings points over their first dozen games.  Straight-line projection over an 82-game schedule calculates to 27.3 wins and 61.5 points.  Compare that to last season's Edmonton Oilers, who finished last in the league -- they had 27 wins and 62 points.  Despite repeated talk about the importance of a good start this season, Carlyle's Ducks are floundering out of the gate once again.

Some analysis after the jump.

The following table looks at all 22 games that Carlyle has coached this season, from the rookie tournament to the regular season.  In each one of these settings, Randy's team has been outscored by better than a goal a game and outshot rather significantly.  Nothing in Randy's this-year-resume looks anywhere near good.

In these 22 games, Randy's team has faced a deficit of 4+ goals in 7 of them -- nearly a third.  Only in 1 game has his team pulled ahead by 4 goals, largely thanks to a horrible Sharks debut from Antero Niittymaki.  And the trends don't seem to be correcting from last season, either.

Take for example the season opener -- last season, the score was 4-0 Sharks by the second intermission, before the Ducks answered with a meaningless response goal.  This season, the score was 4-0 Wings by the second intermission, except this time the Ducks didn't score their meaningless response goal until the following game.  The Ducks weren't remotely prepared to play in any game of their opening road trip, and then the team's gross incompetence made its appearance all over again in San Jose.

Now, to be fair, there have been some injuries and the Ducks have played more road games than home games, but a lot of teams have these excuses and manage to play competent hockey.  To address that road-game-heavy point, here's the results for only preseason + regular season split up by location:

If you're a Carlyle loyalist, I guess you'll point strongly to that home record -- at least the Ducks are breaking even goal-wise at home, though they've still been outshot by a pretty wide margin.  On the road, it's insane how bad this team is -- maybe they should send the Syracuse Crunch on road trips to pick up these results for them.

Here's two things to note about these 19-game results:

And yet looking at the results, the Ducks aren't even close to their opposition, seemingly no matter who is in the lineup.  Whether it's tactical X-and-O problems, motivational problems (Koivu should have been the captain -- another Carlyle mistake), or that Carlyle truly hasn't been given an NHL roster either of the last two years (despite whatever we thought we saw at the Olympics) -- whatever the cause, I don't see anything in these results that says that Carlyle deserves to start next season as head coach, nor that he'll be any part of any real solution this year.  I don't know that he needs to be fired today or anything -- Ducks can search for the right replacement -- but I'm pretty strongly against Randy Carlyle running next fall's training camp.  I don't see any evidence that it did the Ducks any good this year.

Yes, Carlyle has won a Stanley Cup, and I'm totally grateful for that, but you can't sell any more tickets to games from four years ago.  Spreadsheet results keep telling me: it's time for Randy to go.  Feel free to leave your thoughts/reactions/support in the comments, though -- anybody have any good reasons why Carlyle keeps his job?

Prediction: Fowler is back and staying up with the big club, and the Ducks have recalled both Nick Bonino and Kyle Palmieri -- Bob Murray is essentially throwing shit against a wall to see what sticks.  Ducks lose creatively -- nice goal by Lubo, though.