Kings Gameday: As It Should Be

Share All sharing options for: Kings Gameday: As It Should Be 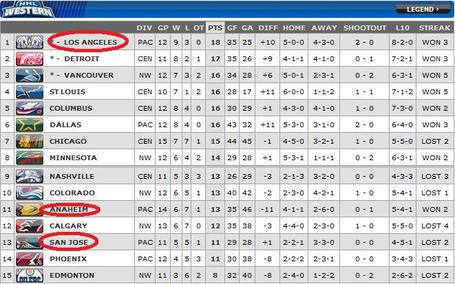 The Kings go up against a tough, disciplined team in the Nashville Predators tonight. The Predators always seem to give the Kings trouble but hey, I'd rather get a win over a tough team than another ho hum victory over a 13th place team like the Sharks. It just means more when you beat a good team, you know?

One thing that's distressing me: the Kings' 2nd power play defensive unit. Last game, the Kings used Jarret Stoll and Davis Drewiske. This sucks. I think the Kings sent Jake Muzzin down so he can reacquaint himself with the left defensive position, since he spent all of training camp practicing to replace Matt Greene. I think the Kings will have either Alec Martinez, Thomas Hickey or Muzzin in that 6th defensive spot by the end of the season, but for now Drewiske will have to do. But he can't do anything on the power play and the Kings need to play either Drew Doughty or Jack Johnson the full 2 minutes until someone offensively competent gets called up.

Overall, though, the Kings are awesome. Jonathan Bernier's in tonight, Brayden Schenn will probably play with Richardson and Westgarth on the 4th line. Maybe Clifford so he can punch Jordin Tootoo in the head. Shea Weber will give me a boner at some point in the game. Should be fun!