MVP: The dynamic duo of Backstrom and Backstrom keeps rolling.

LVP: Brian Campbell had a knee injury and a bunch of zeroes this week.

This was a match-up between the leading teams in each division, and the Freezers slapped the hell out of the Anzeholics.

LVP: Tomas Kopecky had one goal and was a minus seven, which doesn't make for a very strong good-vs.-suck ratio.

Ty Conklin is a greater threat to humanity than drug-resistant tuberculosis.

Sleek and Destroy vs. Fournick Gators

Earl couldn't get the win even with a great week from Loui Eriksson, who put up four goals and three assists.

MVP: Niittymaki is a kick-ass goalie.

Shark fans shouldn't fight each other. The enemies are out there!

MVP: This was a really close match-up, but the Mittens won the week on the strength of strong goaltending from Cory Schneider and Nikolai Khabibulin.

LVP: It would have been better to just leave Jonas Gustavsson on the bench this week, in retrospect.

MVP: 2 Live Drew has Jonas Hiller, Miikka Kiprusoff, and Sergei Bobrovsky. Only the third one matters.

LVP: Shea Webber contributed zero points and a minus three this week.

IAmJoe STILL has Vlasic, who is STILL the only Sharks regular without a point this season. Come on, Pickles!

MVP: Roberto Luongo and Henrik Lundqvist both had strong weeks.

LVP: I don't know if there is a player worth having on the entire Florida Panthers roster, but Tomas Vokoun certainly doesn't seem to be one.

This is an embarrassing loss for Setoguchi's revenge, because Rudy didn't set up his team this week and he still managed to win.

MVP: Alex Ovechkin is the man.

Intaglio's got some injury problems, with both Dion Phaneuf and Marian Gaborik on the IR. 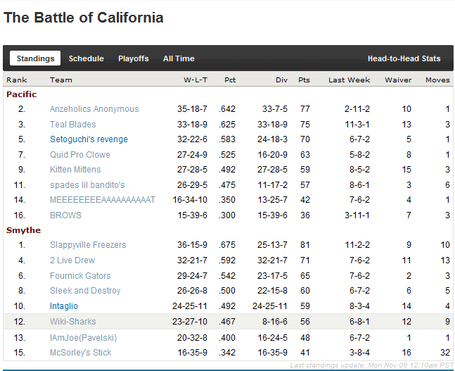