Share All sharing options for: Ducks at Sharks Gameday -- Battle of Cellar-fornia

Well, it's been a little more than a week since these two teams met up in San Jose -- last time we featured a Sleek cartoon and Megalodon did the writing -- this time we figured we'd switch 'er up.  Meg's drawing the cartoon today, and I'm forming sentences -- talk about adaptability! 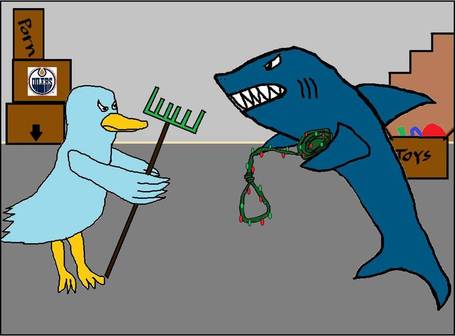 Meg Studios Presents: Battle to get out of the BoC Basement.  Awesome.

Now it's not truly the rock-bottom basement -- Ducks currently sit 10th in the west (3rd in the Pacific) after a 3-0 homestand, and the Sharks are one spot behind them.  But neither team is anywhere near the Kings at this point, and both would have to show some improved winning habits to climb that staircase into the top eight.

Hold the phone (checks inbox) -- looks like there's another guest cartoon submission today, from our good pal Spade-in-Victorhell.  I love it when work gets done for me! 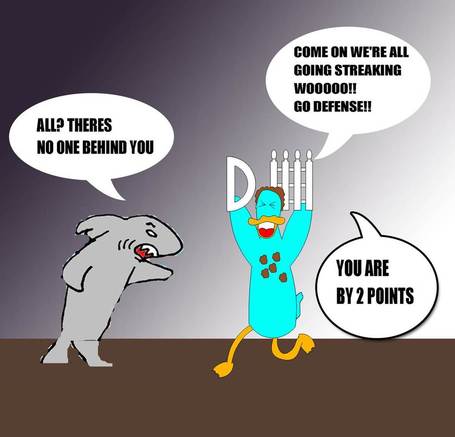 Spade Studios Presents: Making too big a deal out of a 2-point lead.  Fantastic.

The Sharks, of course, are Joe-Thornton-less for one more game, and we'll have to see whether that really makes a difference tonight or not.  The Ducks, meanwhile, went bowling yesterday -- not sure what impact I expect out of that.

Anyways, it's an open thread for everybody -- feel free to leave your cartoons or preactions in the comments.

While I'm rambling, I would like to throw one shout-out to reader pooponastick for this helpful comment:

Is now a good time to change your picture?

Lo and behold, I did so, and the Ducks haven't lost since.

Prediction: Over their past 8 games, the Sharks have won every game they've scored a goal in.  The Ducks, meanwhile, have a small-sample-size habit of improving -- their second games against Detroit and Nashville were each much better than their first encounters.  Tonight, the teams try to really pound the crap out of each other, but instead learn a valuable lesson about tax evasion.  Goals by Huskins, Pavelski, Nichol, Perry, Lilja, and Blake.  Heavily disputed shootout winner by Thornton.