Share All sharing options for: Ducks Gameday -- Sleek sells out yet again.

Today we're going to take a pretty bizarre interlude into environmental considerations for distant-future Winter Olympic bids.  Why?  Because I got suckered by this e-mail:

Being a sports advocate and writer as well I appreciate where you go with your blog.  I would love to talk to you about the United States bid for the Olympics in 2022 and the things that are happening that many aren't aware yet of.

Did you know that the last time the Olympics were held in the United States (at Salt Lake City in 2002) we set a record in both broadcasting and marketing programs?  Over 2 billion viewers watched more than 13 billion viewer hours.  In addition to that the Olympic Committee was left with a surplus earning of 40 million dollars!

Along with the athletic accomplishments, including the most medals won at a home Winter Olympics (with a total of 34).  In 2022 the United States is looking to provide even more excitement and more changes that can really make an impact on the games.

I've written an article regarding these topics that I would really love to share with you, in hopes that you would see it as a good addition to your blog.  Please consider this as it would be a privilege to submit a guest post.  I look forward to hearing back from you!

I'm not exactly sure that Nerissa really does like where we go with this blog -- looking over my archives, most of my Olympic coverage has to do with Peacock Rape or PeacockBlocked -- but I wrote a nice inviting reply which included the following: 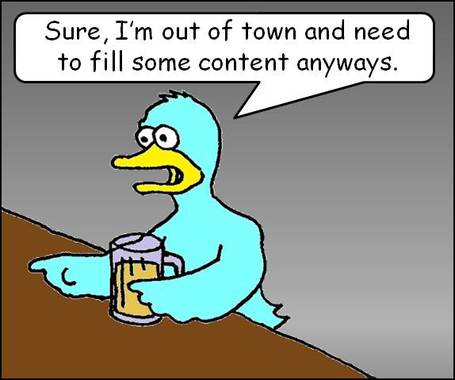 I don't have access to a scanner here in Vegas, but I drew this before I left.

So that's the setup.  After the jump, the article in question, plus a rebuttal from Rudy.

What I didn't realize from the first e-mail exchange was that I was going to be a tool for Dow Chemical today.  Yup -- Dow made me encouraged me to do it:


The United States Olympic Committee (USOC) is not only looking to further the athletic accomplishments but make sustainable environmental changes to the Winter Games.  And with the bid for the 2022 games being award in 2015, they must move fast with their efforts.  This began with naming Andrew Liveris and Dow Chemical the worldwide partner in the Olympics for the next decade.

During the last Winter Olympic Games (the Vancouver 2010 games), the United States held the most medals, with 9 gold, 15 silver and 13 bronze.  With dominance in the areas of snowboarding, Nordic combined and skiing, it only makes sense that the United States is looking to capture the 2022 bid.   With areas like Denver and Reno-Tahoe looking to host, the USOC is looking to make process with the International Olympic Committee in hopes of bring great changes to this world celebration.

With the top skiers, snowboarders and speed skaters, the United States is looking to continue its dominance of the Winter Games by bringing it home.  Gold medal wins including show stopping ones by snowboarder Shaun White (one of the most recognizable Olympic athletes) and Shani Davis, not only proves that the U.S. is a highly mentionable Winter Games contender, but quickly become a leader over the gold medal winners, Canada and Germany.

USOC Chairman Larry Probst first is hoping to rebuild relationships with their international counterparts before releasing all information concerning the bid.  What we do know is that there is a lot of talk about environmental changes, with this the United States could put themselves in high bid mentions with what they're looking to add to the 2022 Winter Olympics.

Why are these changes such a big deal?  As fantastic and unifying as the Olympics are, it's quite a carbon-rich event.  It has been estimated that over 2/3 of the carbon emissions from the event is a result of some of the 1.5+ million attendees traveling (mostly via airplane) to and from the event.

While the Summer Games of 2008, held in Beijing, made great efforts to showcase conservation practices and sustainable energy sources, CEO Andrew Liveris and USOC members are looking to do more by basing off of the services used in Beijing.  Exactly what environmentally friendly services did the Olympic facilities feature?
Dow Chemical saw the opportunity to promote sustainability in the Olympics in 2008, helping provide the filtration and insulation for the events.  That vision has progressed to include dozens of other products which will help reduce waste and promote conservation.  You can expect these products to appear at the coming events over the next decade and be a part of the USOC recommendations.

Okay, so it's not that horrible, I guess.  Planetary concerns are cool, I suppose, and another Winter Olympics on North American soil means that NHLers can participate (which matters way more to me than whoever Shaun White or Shani Davis are).  Know your audience, Nerissa and Daniel!

Of course, one thing that's sort of funny in these two pieces is that apparently the United States won 37 medals in Vancouver -- three more than what they won in Salt Lake City.  If I were more patriotic, I'd probably suggest we try to put the games back in Canada.  :)

But it still was a sneaky ploy by Dow Chemical, no?  Suckering a poor lazy blogger with questionable morals into a semi-endorsement?  To balance this out, Rudy sent me some random quotes from some unknown news sources -- let the Dow debate begin!

Its track record in other countries is potentially criminal.  After the deadly leak of methyl iso-cyanide in Bhopal, India, Union Carbide, and subsequently, its purchaser Dow Chemical, abandoned the site of the leak.  To this day, Dow has contributed nothing towards its obligations to clean up after the gas leak that killed more than 20,000 people, and it continues to shelter fugitives from law from standing trial for criminal negligence for this event.  The civil and criminal cases against Dow for environmental damage is still underway in India.  Till the case has been decided, Dow operates in limited capacity in India.

The United States military used napalm in their efforts during the Vietnam War.  Dow was one of several manufacturers who began producing the compound under government contract in 1965.  After experiencing protests and negative publicity, the other suppliers decided to discontinue the product, leaving Dow as the sole provider.  The company carefully considered their position, and decided that this was a matter of principle, and "its first obligation was the government".  Despite a boycott of all its products by anti-war groups and harassment of recruiters on some college campuses, Dow continued to manufacture napalm B until 1969.

Agent Orange, a chemical defoliant containing dioxin, was also manufactured by Dow in New Plymouth, New Zealand and in America for use by the U.S. military during the Vietnam War.  In 2005, a lawsuit was filed by Vietnamese victims of Agent Orange against Dow and Monsanto Company, which also supplied Agent Orange to the military.  The lawsuit was dismissed.

So I guess there's two major lessons to learn today: Be careful accepting guest posts, and be careful which blogs you submit guest posts to.  Oh yeah, and go environment!

I'm not sure I'll be free for the start of tonight's game -- we're having group dinners most nights, it seems -- but somebody shoot me a link anyways.  I'll join in eventually.

Prediction: Getzlaf makes a stupid pass and earns himself the nickname "Agent Orange".