Texas still sucks - nothing has changed in that regard since my comments the last time these two teams met. But now, almost a month later, it's frustratingly hard to make fun of the Dallas Stars as a hockey team, as they are stubbornly holding on to first place in the Pacific division.

I wasn't alone in having low expectations for the Stars this season, of course. There weren't many who predicted prior to the season that the Stars would be a playoff team, let alone that they be leading the division more than a third of the way through the season. But they've been playing well and taking advantage of inconsistency from the other Pacific teams, and so here we are:

The Sharks play Dallas today and then again on Thursday. That's huge.

You know what would be great? If this is the week the Sharks pass Dallas and stay ahead of them for the rest of the season.  This whole thing that's been going on where the Pacific is wild and crazy and unpredictable? I'm over that. It's been fun and everything, but it's time to get back to normal. The Pacific should have the Sharks in the lead, followed by the Kings, then maybe the Coyotes or the Ducks, then Dallas should be last. Anything else is just ludicrous.

What is it that makes the Stars so good this season? To me a big part of it has to do with their balanced scoring. Here's the Stars roster, sorted by points scored: 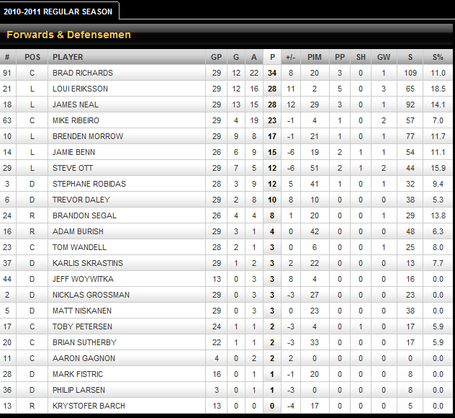 Now compare that to the Sharks, paying special attention to the drop-off in scoring between the top seven guys and the rest of the team: 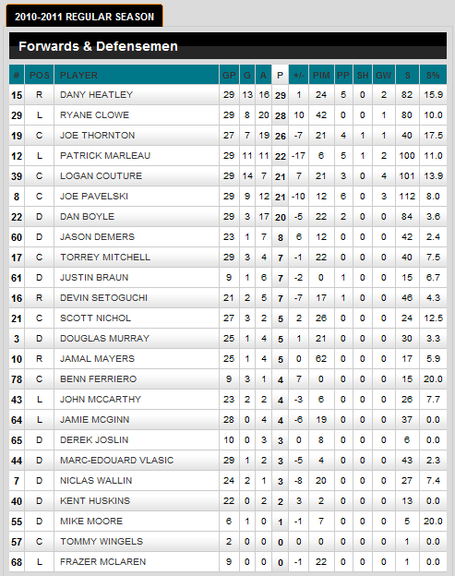 As awesome as it is to see guys like Ryane Clowe, Logan Couture, and Joe Pavelski all contributing as much as the big guys, that huge gap between Boyle and Demers is significant. The Sharks aren't the one-line team some have accused them of being in the past, but they also aren't a team that gets a lot of scoring from anyone south of their top two lines (and Dan Boyle). Guys like Devin Setoguchi and Jamie McGinn have been occupying roster spots this season, even spending some time on the same line as guys like Joe Thornton or Dany Heatley, and have produced very little.

Relying on a small group of guys for your scoring leads to inconsistency. If those guys have a good night you can put up a bunch of goals, but if someone is having a cold streak or gets injured then you can struggle to score at all.

The Pacific division lead could belong to the Sharks if they can win these next few crucial games. Some goals from unexpected sources would go a long way towards getting those victories.

Prediction: Sharks win 3-1, with goals from Setoguchi, Nichol, and the offensive dynamo that is Marc-Edouard Vlasic.