LVP: Remember when Jean-Sebastien Giguere was the best goalie in the world? Neither does he, apparently.

In this match-up between the leading teams in the two divisions 2 Live Drew won a decisive victory. You should be embarrassed, Anzeholics.

MVP: You've got Ryane Clowe on your team? Good call.

LVP: Golly Patrick Marleau, what a terrible week you had: no points and a minus five.

I'm getting slaughtered in this league. It's terribly depressing.

Sleek and Destroy vs. BROWS

MVP: Craig Anderson had a decent week, which was all it took to win the goalie categories up against Sleek's worthless squad.

LVP: Kris Versteeg had one assist but was a minus four. I guess that's what happens when you play on the Leafs.

Even without any contributions from the mighty Ty Conklin, spade still managed to win the goalie categories by riding Carey Price.

LVP: Most of the Mittens were underwhelming this week. P.K. Subban was especially crappy.

I actually started writing about this match-up as if Rudy lost, since I'm so used to that being the case. It took me a second to figure out he actually won without setting up his team.

MVP: I guess I'll give it to Jimmy Howard for starting three games, even though he didn't play particularly well. "Games Started" is worth just as much as any other category, after all.

LVP: Stephane Robidas went scoreless and was a minus two.

This was a really close match-up. Only a point separated them at the end and they tied in four categories.

MVP: Cam Ward. Whenever your GAA is below 1.00, you're doing something right.

LVP: Does anyone know who Theo Peckham is? All I know is that he's apparently bad at hockey.

It's so weird to see Martin Brodeur as such a liability in goal this year. He was injured for a long time and now he's back but still sucking.

MVP: If you would have tried to tell me that having the goalie for the Panthers on your team would be a good thing, I would have called you a filthy lying sack of crap - so you could say I'm pleasantly surprised with Tomas Vokoun this week.

LVP: I don't think Quisp set up his team this week. Unlike Rudy, he didn't have enough talent to win anyway. 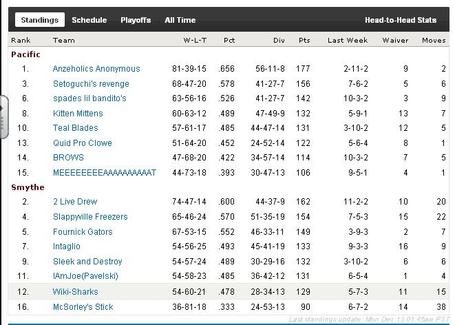