Share All sharing options for: Ducks Gameday -- Carlyle gets Extenze'd

Well, by now everybody's heard the rotten news: despite running a "training" camp that led to the worst 3-game start in Ducks history (and very possibly league history), despite his team being outshot by 102 shots over a preseason and 189 shots so far in the regular season, and despite Anaheim's amazing ability to continually produce terrible on-ice efforts this season, head coach Randy "Gorilla Head" Carlyle's contract has been extended another season.  Hooray for bananas! 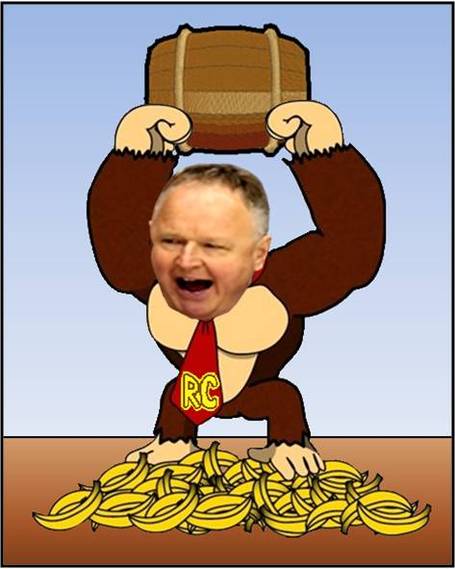 Still in Vegas, so I'm recycling images once again.

It's a fairly mind-boggling move, as twice so far this season I've called for Carlyle's firing -- fortunately, neither instance really picked up any momentum, as the Ducks immediately won six straight games after the first Fire Randy post, and then won three straight after the second one.  Maybe in that sense Randy's extension is a good thing -- it does give me the continued ability to negatively inspire a win streak, I guess.

But still, this season the Ducks have been outshot in 2/3 of their games, and 14 times the margin has been by 10 or more shots.  I guess I should look forward to being severely outshot next season, too.  Good luck, Hiller!

In terms of today's game, it should be pretty interesting.  The Capitals, winners of last year's Presidents' Trophy, come into this game on a six-game losing streak, in which the Caps have only potted 8 goals while allowing 22.  Before this slump, the Caps were 18-6-2, and had outscored opponents 88-68.  I'm a tad suspicious -- this could be an attempt by the Caps to avoid last season's double curse: 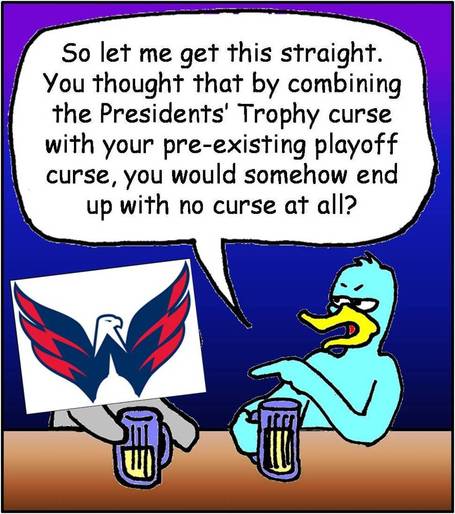 It's tough to say whether it's a good time to be playing the Capitals, or whether that was last game, but it does feel like an opportunity for the Ducks to kick a team while they're down.  The key in my eyes is still blueline personnel -- the Ducks are 10-2-1 when Lydman, Fowler, and Lilja all play.

Prediction: Lilja sits; Ducks get outshot, outplayed, and outscored -- it's the Carlyle way.