It's a fairly busy morning for me today -- I'm checking out of the ol' GVR for the third time in three weeks, and I'll be flying back to California this afternoon, scheduled to land sometime just after puck drop.  So I'm throwing together a hasty post before I check out, but by now you should be used to that.  In the meantime, though, take Megalodon's quiz below: now that's some respectable blogging effort! 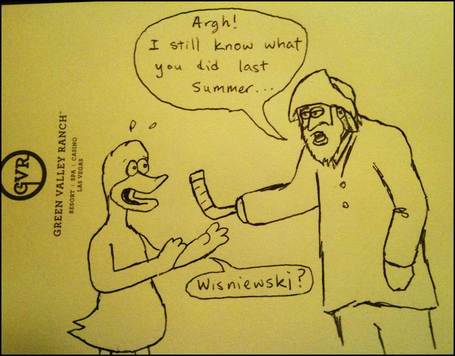 I made this hotel cartoon especially crappy for Kevin Y.

The poor Islanders seem to have the exact wrong combination of overall suckiness, bad luck, and injuries -- they've only won 1 game out of their last 21 (holy Jesus!), and have been outscored during that stretch by better than a 2:1 ratio (36 GF, 78 GA).  They've scored 1 power play goal over their last 14 games, and are playing a whack of defensemen I've never heard of, though that Andrew McDonald character sounds a bit familiar.

But don't forget -- Anaheim loves to play sucky against sucky opponents -- recall when the Islanders visited Honda Center, and the Ducks took a total of one bad-angle shot over the first 20 minutes.  Only thanks to some epic heroics from MiracElhinney were the Ducks able to take two points -- which probably makes him the starter today.

And once again, sorry, Islanders -- I promise, when I made that cartoon I had no idea we were playing again this season.  :)

Prediction: The Islander 2-point giveaway continues, and even the woeful Ducks take advantage.  Goals by Sweden and Italy.