Busy days, these ones -- I haven't watched either of the last two losses yet, other than the period or so I was home for each of them, so I'm deferring you to Spade's weekend journal instead.

Instead, I just thought I'd go with the holiday spirit and channel my inner Norman Rockwell -- maybe that will spark a victory: 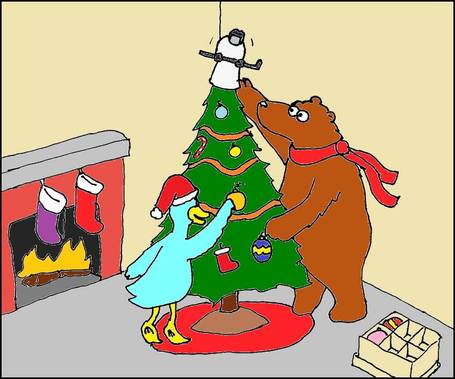 I wish we played the Bruins more often.   I can draw bears all day.

For a change, I'll actually be at home in front of my television for proper game commenting today -- seems like it's been a while since that happened.  Stop on by and share in the fun!

Prediction: In the spirit of Christmas, the Ducks and Bruins share a 3-point game.  Ducks goals by Fowler, Selanne, and Perry.  Getzlaf has three assists, two of which come on Ducks goals.