As a cartoonist, sometimes I get struck by a concept that seems difficult to draw -- like a buffalo who is adept at using a sabre, for example: 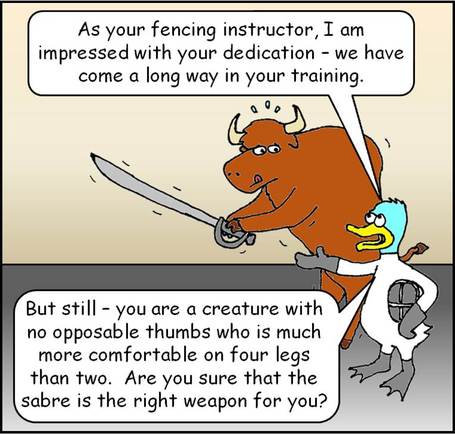 Anyways, the Ducks do have a pretty respectable 7-3-1 record against the eastern conference this season, though that does include regulation losses to both the Devils and the Islanders -- seemingly Anaheim is more comfortable playing the better teams in the east than the lower-tier ones.  Buffalo currently sits in the bottom third of the east -- we should probably be worried.

Today's game is Center-Ice-only, so suck it, non-subscribers I'll be here, at least.  :)  One extra note -- this will be my last gameday post for a little while, but I'll tell you more about that later.