Sick of the Ducks' drama, Sleek leaves the hemisphere.

Share All sharing options for: Sick of the Ducks' drama, Sleek leaves the hemisphere.

Merry Christmas, assholes!  Or as they say where I'm headed, "¡Feliz Navidad, burros!"  That's right -- I'm off on an adventure with the folks and siblings to Chile, Argentina, and Brazil.  ¡Viva la vacacion! 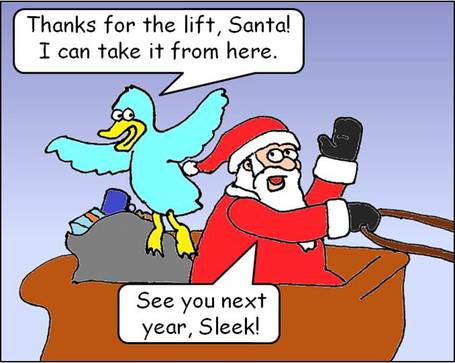 It was the cheapest flight on Expedia.

I really don't know what we're in store for on this trip, other than it's a group tour that I haven't read up on, and that I'll be departing today and not returning to the northern hemisphere until January 8th.  This will obviously put a damper on my hockey viewing, and probably my ability to post or comment much as well.  Play nice in my absence!

Ducks fans, I am leaving you in Spade-in-Victorhell's charge -- he'll be writing marginally coherent gameday posts for the next couple of weeks, and even though I've read three of them, I still don't fully know what you're in for.  It'll probably be a nice change of pace from my corniness, though, and we'll see if I even have a job here when I get back.  :)

Anyways -- have a great holidays and new years, everybody.  And somebody be prepared to answer the question upon my return: "Who were the best and worst Ducks players in my absence?"  Don't worry, I'm anticipating the worst.