Anaheim Ducks (18-16-4) at LA Kings (20-12-1), 6 pm
for more ducks visit Anaheim Calling they don't allow douches to author there site and -for more king visit Jewels from the Crown- not written by a dog humpers

before we get to the post..i want to thank the 3 tenors of the boc for letting me author..meg even helped me edit a little only for me to destroy it with my own editing*...rudy is gonna eat my saturated smelly lunch today cuz im writing about a boring subject...but im cuter and have gotten more tail than him..so by default my post is better..even if it's not really..

so drop your male chickens and grab your socks and lets get this post and spade era rolling.

An interesting tidbit about me and this will get us into this gameday: I love to play chess! THUUUUUUUD! That's the collective sound of BOCers' jaws hitting the floor!

An opening move popular in chess in the 1800's (because they were stupid back then) that isn't used much anymore these days except by novice chess players (Rudy) is the King's gambit! Here's a cartoon illustration to give you a feel, with our faithful Southern Cal teams demonstrating(apologies for the poor coloring..i lost my photoshop and im not used to paint): 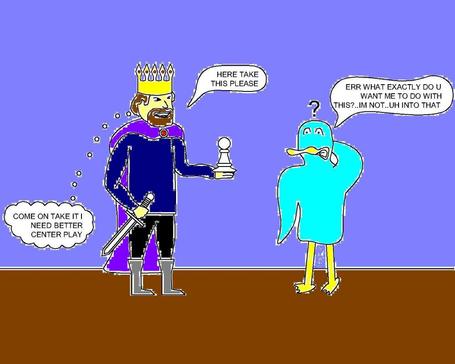 The white pawn, the player that goes first..(wait why does white go before black? thats fuckin racist...and where are the brown pieces? ....fuck chess it was created by the nazi's and lucifier) goes to the popular e4 spot, or forward 2 spaces. This assumes black will match and go to e5 (they'll be back to back). Then white moves his next pawn to the right up two spaces as shown here: 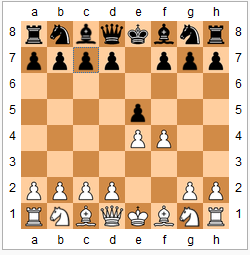 Gambit time! The white wants the black player to take that free pawn! The reason? Supposedly to get prime/better center position, which is desirable in chess and 4somes. Now I'm all for gambits. In fact I do them a lot as I'll give up certain pieces (what is known as a gambit) to get rid of certain pieces I fear from the opposing player (I won't tell you which ones I fear in case you man up and play me) but I've tried this amateur move on computers for fun, and it's usually just a waste of a pawn and the comp just pulls out a knight and dictates your next couple moves anyways, and it's always better to do the dictating. There much better openings (the English opening is a favorite of mine) but try it out and see if you can make it work!

-Geez kings your centers are pussies. They can't even start over 33 games. Wusses! Oh wait that's not your fault, it's the schedule makers. This will muddle stats a bit but still give us some insight.

-Baldy vs ugly raccoon boy: What we suspected was correct: Getzlaf does not shoot enough; look at Anze's shot count in comparison. For reference Perry has 130 shots. Imagine where Baldy could be if he shot more! So who's the better center this year? There pretty even...if you account for games in hand..so a wash on the top line...But IMO getz could be even better..especially if he wasn't such an idiot. He's picking up goals lately.. by yup you guessed it shooting and not passing to the other team, and what the raccoon hits?...I need proof..someone post a pic!

-Cancer survivor vs bathroom stoll: what a contrast of second line centers...i mean look at the minus 6 for our boy..probally a product of the rats and teemu non commitment to defense...but still..u would hope koivu would serve a more rucchin role..i don't think hes to blame..but the numbers aren't pretty..although hes generating offense..more than bathroom..cleaning up the rats and teemus rebounds...so yea both could learn to be a little more like each other. Stoll is the winner of the southern cal center ass kicker award for 51 hits.

-Bonino vs ridiculous ugly man zues: Wow Bonino as good as you've looked you've played 24 games without a point? Yikes. A -2 for a rookie though is respectable. He's looked dangerous in the time he's gotten. This is where the Kings have the clear advantage..for a 3rd line checking center..handzus has good numbers...fuck u zues and your hair.

-Stone hands vs a nipple named trevor: ducks actually win here but who cars cuz it's the 4th line...when I started this stone hands was a big minus..but hes worked himself back to respectful levels...who gives a shit what anyone named trevor does(I think brokenyard's real name is trevor.. if it is sorry bro..ive always liked you)

So final analysis: the top two centers for both teams are pretty much equal(2nd line in different ways)it's the 3rd center were the kings have the big advantage. I guess it's really the Ducks who should be looking for a little better center play.

*Earl proposed me writing as crappy as I do and meg translating..I think i want to try this for the nsahville game..so be ready meg

**if you notice I refuse to type gawds name correctly..or use it wrongly...I still repect the man..I sing manson lyrics and skip saying gawd..im lame

Prediction: Ducks win despite putting themselves into checkmate. 2-0, with goals by Vish and Parros...former players come back to haunt the Queens! King of ptown beats up his brother in protest