LVPs: The Anzeholics have two goalies on the IR and one of the Gators' goalies is Martin Brodeur, who suuuuuuuuucks this year.

How did our premier match-up end in a tie? This will not stand, man. You're both in big trouble.

MVP: Sidney Crosby gets more points in one week than a lot of other players do in two or three.

LVP: My team has more zeroes than Earl's choir.

I lost despite benching all of my goalies for the last half of the week and sitting on a 0.50 GAA. Even when I cheat I'm doomed.

Sleek and Destroy vs. Kitten Mittens

LVP: Ilya Kovalchuk had no points and was a minus FIVE. I'll wait while everyone finishes laughing hysterically.

There are very few players on the Devils that are worth a damn in fantasy hockey. I am severely regretting my first round pick of Zach Parise.

MVP: Antero Niittymaki only played one game for the Teal Blades, but it was good one.

LVP: Brad Stuart and Shea Weber both were minus two and as pointless as life itself.

LVP: We will never know how many points McSorley's bench players could have gotten for him. The LVP goes to him for not setting up his team.

Now that I look at it, BROWS didn't set up his team either. Come on, people! Xmas is no Xcuse!

LVP: Since he didn't set up his team Rudy only had seven skaters actually play, and none of them got more than two points. That's weak.

Rudy's team is the New York Islanders of our fantasy league.

LVP: Quid Pro Clowe's players did really well, with Martin St. Louis and Henrik Sedin both putting up seven points, but the team was hampered by the manager's failure to set up his team.

LVP: Intaglio got two lousy games from Cam Ward and nothing else from goalies.

As I'm writing this the Kings just scored their third goal against the Sharks. Fuck everything. 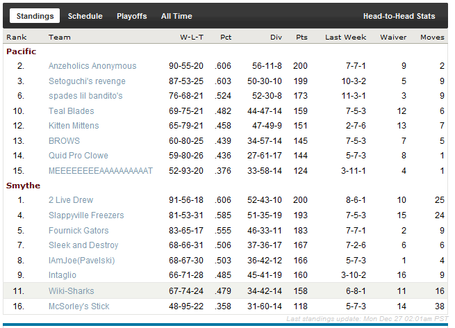