Share All sharing options for: Sharks Gameday: Strunk and White Strike Back

(I'm terribly sorry, everyone. I fought hard against it, I looked into legal options, and finally I did what I could to mitigate the damage, but Spade has still unleashed two blog posts, mangling the eyes and Grammar Senses of our dear readers. I've said before that editing one of Spade's posts would be like trying to dry out someone's swimming pool - and yet still I attempted it, a prayer to St. Jude echoing hollowly in my heart.

What really frightens me, and what should be absolutely terrifying all of you Ducks fans out there, is that the two posts Spade has published so far were the two that I DID get to see and try to edit first. What fresh horror awaits us Friday? Without the restraining bulwarks of my semi-colons and capitalization, what hope do we have? )

Anyways! The Sharks are a hockey team! Sort of!

A quick review of last game for those that didn't see it:

Period 2: Much better. The Sharks are still getting outshot, which is unsettling, but both teams had a good number of chances. This is clearly a hard-fought matchup of two Western Conference powers.

Period 3: *Megalodon swears and cries and punches a baby in the face*

So let's try and put all that behind us and focus on some positives, shall we?

Logan Couture is the best thing to happen to hockey since skates were invented*. If you haven't done it yet, please take a moment to go to your favorite NHL stats site and look at the player list sorted by goals scored. I'll wait.

Here's a version of what you should be seeing: 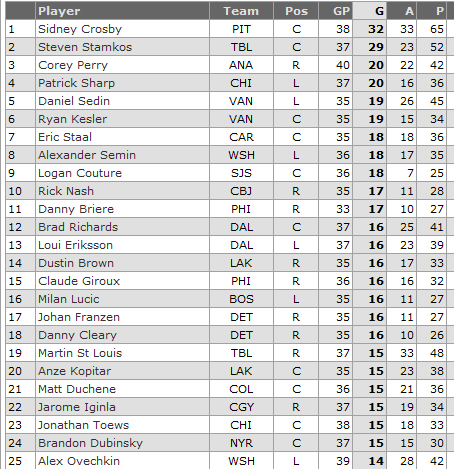 There's Logan "Wolverine" Couture, 9th in the league (really tied with the fifth-most total goals, but whatever) in goals scored. He's higher than anyone on the Sharks (Dany Heatley is just off the bottom of this list). He also has more than anyone in the Pacific Division except for Corey "Stupidface" Perry.

You know how many goals the leading scorer on the Wild has? Ten. And it's a tie between Cal Clutterbuck and Brent Burns, who is a defenseman.

The best thing about Logan Couture is the way he scores his goals. He's not just a finisher, he's not just getting lucky - very often he creates his own offensive chances. He uses his speed and his great hockey sense to make things happen. Players like that have ridiculous amounts of potential in the NHL. If Couture keeps up his play this season he deserves the Calder. If he plays like this throughout his career he'll be a superstar.

On to tonight's game. The Sharks should start Niittymaki tonight, based on the stupid "the team just didn't play well in front of Niemi" logic that often determines these things. There was no excuse for last game's sleepy, stupid performance. Tonight the Sharks have to be better.

Prediciton: Sharks win 3-1, with goals from Couture, Vlasic, and Nichol.

* = dedicated readers will remember that hockey was originally a murderous contest in which knives were strapped to boots.