MVP: Kari Lehtonen is good this year? I feel like I've slipped into an alternate dimension.

LVP: No points this week for Evander Kane.

In this match-up between the first and last place teams in our league, McSorley's Stick tried out the interesting strategy of not updating his roster this week. I'm surprised it wasn't a bigger victory for Anzeholics.

MVP: Dustin Byfuglien had 3 points and a ridiculous 16 shots this week.

Both of our teams had pretty crappy weeks. Nothing impressive going on here.

Sleek and Destroy vs. Intaglio

MVP: Marian Gaborik put up four goals this week. Next week I'm sure everything will be back to normal and he'll be injured again.

LVP: A huge zero points for Evgeni Malkin this week.

It's a good thing Saku Koivu wins face-offs, because he had zero points and was a minus three this week..

MVP: Tim Thomas has returned to his early-season form. And that form is a giant brick wall in front of the goal.

LVP: Antero Niittymaki had a down week this week, but he should bounce back this week.

Joe Thornton/Pavelski need to pick it up offensively for the Teal Blades to start kicking ass again.

MVP: Oh, Sean Avery. You and your three assists and nineteen penalty minutes! You're such a rebel.

Oh, and Clarke MacArthur too. He also had zero points.

MVP: MY NAME IS RYAN MILLER AND I WILL DESTROY ALL GOALS! RAAAAAAWR!

LVP: Gotta give the LVP to team manager Mr. Plank this week, since all the players that he actually had in put up impressive numbers, but half his team didn't get into the lineup.

How good was Ryan Miller this week? BROWS' other goalie is Rick DiPietro and even that couldn't screw up the goalie categories for him.

LVP: Just like in life, Rudy manages to snatch failure from the jaws of defeat, as he barely lost with only half his team playing. The manager is the problem here.

Rudy doesn't even have Dustin Brown in a starting position. For shame!

MVP: I'm going to go out on a limb and say that Sidney Crosby is a good player.

LVP: Spade reaps the inevitable rewards of having Ty Conklin as a starting goalie: a GAA of 7.27.

Spade got beaten so bad he probably thought this was a spelling contest. 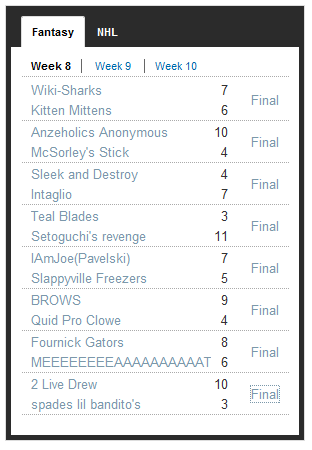