For a team that has so much trouble winning on the road, yesterday's game in Edmonton was a rather depressing win -- the Ducks never trailed in the game or the shootout, but they seemed overly content to rest on a minimal amount of offense, putting incredible pressure on Hiller to bail the boys out again and again.  That he did, but man -- the Getzlaf line is a waste of time (and $15.75M in cap space) these days, rarely creating anything in front of the net, and the power play is even worse; Hiller probably made the best two saves of Anaheim's man-advantage time yesterday.

But -- two points is two points, and children at CHOC hospital now have a singular tree to gather around.  Thank goodness for the Oilers' shootout woes.  Onward to Vancouver! 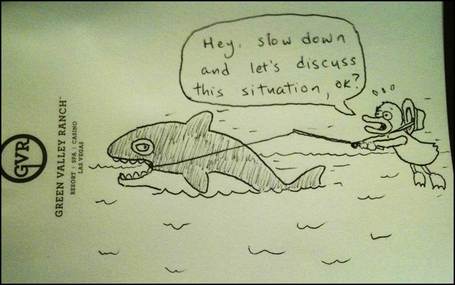 Another in the fine series of hotel room drawings.

I should apologize at the crappy-effort posts lately.  It's not just that I'm work-busy on the road in Vegas, but most of this week I've been operating out of a client's office without any provided internet access, so basically we're stuck with whatever I can draw and type before leaving the hotel room.  But I'll be back home tomorrow night, then it's just one more week of travel shenanigans!

Prediction: Can Sleek ditch the work-team dinner two nights in a row?  I had pretty good success last night watching the game from the sports betting area of the casino (they muted Hayward and it was excellent), and the best part was actually at the start of the shootout when a bunch of non-hockey sports-bet-takers gathered around a TV to marvel at hockey's sideshow -- they seemed genuinely impressed.  Anyways, Ducks win, maybe?  First goals of the year for Lupul and Marchant.