I wanted to write today a bit of a think-piece on the contrast between Toronto and Anaheim, specifically as it relates to yesterday's exchange of J.S. Giguere's contract for Jason Blake's.  Now nothing in this piece is really going to try to evaluate either player -- for purposes of today's discussion Jiggy and Blakie are both guys who earned big money in the past but are unlikely to do it again.  They are "bad bets" -- significant costs with unclear outcome.

Also involved in this "game" (sorry, I'm using the economic term here) are two franchises, the Maple Leafs and the Ducks, with the primary distinction being that Toronto is much more constrained by the salary cap ceiling -- it would prefer to spend more than the cap maximum on its roster, if it could.  Anaheim is middle-spending; it has neither the pricing structure nor the ticket demand to spend like Toronto, and is constrained more by its own internal budget than the artificial salary cap. 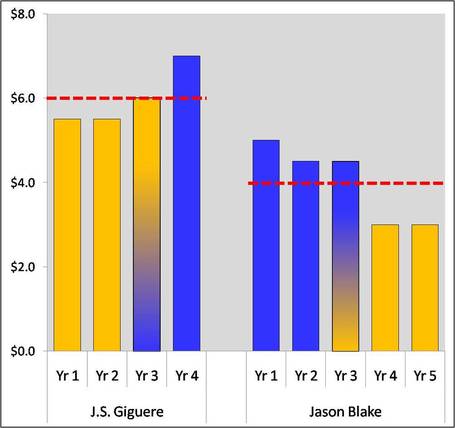 As such, they look at contract structure differently; I've created a chart to the left to help illustrate my point.  The annual salaries for J.S. Giguere's and Jason Blake's current contracts are shown on the bar chart -- the years the Ducks paid are orange, the years the Leafs paid are blue, and we are currently in Yr 3 of each contract, hence the mix of colors there.  Additionally, I've drawn a dotted red line which represents their salary cap hits for the duration of their contract -- if you're unfamiliar, for salary cap purposes each player is measured by their averaged salary for a contract.  For cap purposes, Giguere is always a $6M/yr player, and Blake is always a $4M/yr player.

To top-spending teams like Toronto, the only number that matters is the cap hit -- they are relatively indifferent to the height of the actual salary bar.  Toronto views the annual difference between J.S. Giguere and Jason Blake as $2M -- the space between the red lines.  And to Toronto, who figures to spend some $56M or so in cap space next season, that difference is somewhat minor.  It's less than 5% of its budget.

From Anaheim's perspective, though, the red lines are rather insignificant; they only matter if Anaheim decides to spend as much as possible, which isn't likely.  The heights of the bars matter more in terms of actual profitability, and during Year 4 Anaheim sees the difference between J.S. Giguere and Jason Blake as $4M -- the difference in height of the bars.  Against a middle-spending budget, a $4M savings is pretty significant.

It's a mixed-up and contrived game all caused by the averaged-salary structure of the CBA, but that's precisely why this sort of deal seems to make sense for both sides.  As long as both sides are choosing which "bad bets" to take on, it makes sense from the Anaheim perspective to take the years of a contract where the height of the bar is below the dotted line; they are paying less for their gamble, probably with less possible upside.  From the Toronto perspective, they are mostly indifferent to the height of the bar, so they can absorb years where the height of the bar is above the dotted line.  It's not exactly preferable but Toronto is sort of indifferent enough that it works.

Of course, this all is theoretical and pretty much ignores what sort of players Giguere and Blake will be on their new teams, but it does show why there was some built-in reasoning why each team acted the way it did.  And I think we'll see more of it in the future -- you may want to pay attention to how contracts are structured, because certain years will appeal to different groups of teams.  It all depends on what currency they are dealing with.

One last note: I'm actually pretty glad that Anaheim is not a "Rich Dad" like Toronto.  Certainly higher spending is theoretically advantageous towards winning, but as a blogger, doing cap math is a real headache, and as a fan, I'm pretty happy with where ticket prices are.  I'm glad I don't have to endure waiting lists for tickets or whatever happens in Toronto -- plus the Ducks have had plenty of middle-spending success.  Just my preference, though -- I certainly understand the appeal of limitless spending.

Now I've still ignored (and still intend to write up) a proper "teary" farewell for J.S. Giguere -- so far both of my reaction pieces have been extremely jaded and detached, but I definitely have a huge soft spot in my heart for Jiggy.  The 2003 postseason, despite its ultimate ending, was probably the most magical two months of my life, and that was all on Jiggy's back.  He was beyond legendary, saved our asses a ton, and was a fantastic face for the franchise -- that all needs proper recognition, and I'll get to that.  For now, though, Teemu Selanne is officially our last connection to the pre-lockout era; that seems kind of fitting.

At any rate, know that I deeply appreciate Giguere's Anaheim legacy, despite not writing about it yet.  We are pretty goalie-spoiled in Anaheim, but we shouldn't let a great one like Jiggy pass quietly into the night.  Best of luck, Giguere, and thanks for everything.

Prediction: Since today's game is not televised, I won't bother showing you a picture of a webbed foot kicking out of a panther's stomach.  Instead, you'll just have to listen to my audiomagination version of it: