Kings Gameday: Segal Out, Clune In

Share All sharing options for: Kings Gameday: Segal Out, Clune In

The Kings made their big playoff move today, waiving Brandon Segal and bringing up NHL superstar Richard Clune.  OK, not really, Clune sucks, but he is feisty so that's... something.  The Kings actually sent Clune down to Ontario of the ECHL yesterday in a nifty little move to get him in Los Angeles before they could officially call him up after Segal went through waivers.  The move adds a little sandpaper to the Kings line-up and hopefully makes the Kings a little more entertaining.

I liked Brandon Segal but I can't say I'll really remember him a few years down the road.  The 27-year old winger's game was full of sound and fury, signifying nothing; what I mean is, he didn't do shit.  Sure, he hit a few people and he fought twice and he got two points, but mostly he skated around and didn't really affect the game too much.  I feel bad that he's on his 5th team now, plus he now has to live in Texas, but that's kind of the plight of players like him.  Godspeed, Brandon Segal, and I hope you someday find a place where you can be happy.  Also, shave your goatee, it makes you look like Dane Cook.

As one player leaves, another enters.  It's poetic.  It's like, the duality of man or some shit.  Richard Clune is a 22 year-old left winger who is... kind of a dick.  The rascally left winger has tallied 12 points in Manchester this season and somehow has 19 fighting majors in 41 games.  Clearly, he has a little bit of a chip on his shoulder.  Maybe it's because he looks like Tim after he forgot to check that door for heat in Backdraft.  Anyway, Clune will probably set our hearts aflutter through his dickery and will give the Kings the middleweight they've been missing all season. 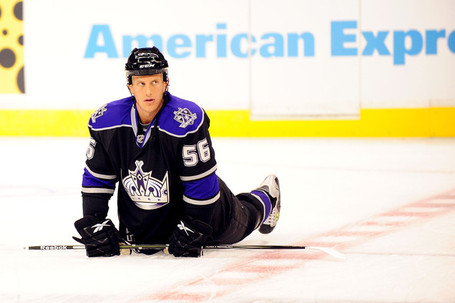 Clune's call-up does leave the Kings in a little bit of flux, and if I were Raitis Ivanans I'd be getting nervous.  The Kings now have 8 players that can play left wing: Ryan Smyth, Alexander Frolov, Brad Richardson, Oscar Moller, Scott Parse, Ted Purcell, Richard Clune and Raitis Ivanans.  Of those, 4 are dedicated left wingers while the others play more than one position.  Clune now provides the Kings with grit and he can actually skate, something Raitis Ivanans can't do.  I'd look for the Kings to gradually shift to a 4th line of Clune-Moller-Purcell/Moller, with Ivanans finally getting the day off unless we play Anaheim or something.  Or maybe they make Clune play on the right wing because Goddammit we can't win without Raitis Ivanans. Oh, look at that.*

*I guess Ivanans is useful because he can bounce Zack Stortini's head off the ice tonight, but that line is pretty brutal.

Yesterday Bob McKenzie and Rich Hammond said Brandon Segal was put on waivers, Richard Clune was sent to Ontario and to expect a move tomorrow.  People's immediate reaction?  The Kings are trading for Ray Whitney.  What?

Tonight is Wayne Simmonds Bobblehead Night, as you probably know, and if I don't get one of those things I'm going to flip out.  If you think I'm above stealing a cheap bobblehead from a little kid and then sprinting away while laughing with malicious glee... you're wrong.  They're only giving out bobbleheads to the last 10,000 people that show up so all of you shouldn't get there until about 7:15, 7:20 just to be sure you get one. Don't get there early, that's foolhardy.  Show up late.*

Does anyone feel bad for the Edmonton Oilers?  No?  Yeah, me neither.  But still, it's kind of depressing to look at where they've gone since they almost won the Cup.  SBNation sister site The Copper & Blue had a great post detailing how atrocious their shutdown line has been recently and it's, it's.. hahahahahaha!!!  Sorry, I promised myself I wouldn't laugh.  But seriously, they're boned for a while.  The saddest part?  In 2013, they'll have almost $15 million in cap space tied up... in Sean Horcoff (33 years old), Lubomir Visnovsky (35) and Nikolai Khabibulin (39).  BWAAAAAHAHAHAHAHAHA!!!!  Dammit, sorry, now I feel bad.

Prediction: Edmonton fans get upset as they try to shout, "Seriously, Ales Hemsky is a franchise player!" over all the laughter.