Hey, what do you know?  It's a lazy-blogger Alberta-weekend special -- two gamedays, one post!

The Ducks play their last two games before the Olympic break this weekend in Alberta, a land stricken with the mysterious disease known as "suckitis".  For purposes of this cartoon, at least,  "suckitis" is a malady that infects NHL franchises, hampering the team's ability to score goals and pick up wins.  It appears to be contagious -- two months ago Edmonton caught it, but then one month ago it ominously got transmitted to Calgary, as well. 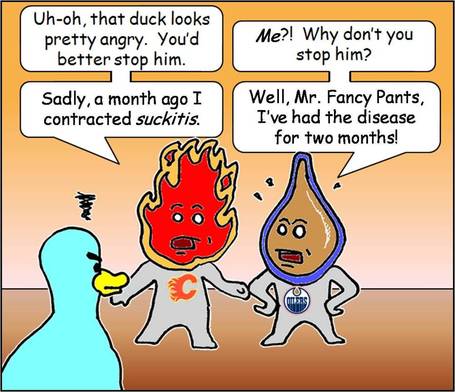 Warning -- my characters are starting to resemble Teletubbies.

Now I haven't watched a lot of these two teams in the past months to fully break down how or why results have plummeted (and my old go-to site is mostly tumbleweeds these days -- sigh).  Certainly the injuries to Ales Hemsky and Nikolai Khabibulin are significant for the Oilers, and luck always matters -- neither team is probably as bad as their bottom row nor as good as their top row.  Still, it does look tempting, doesn't it?  Ducks are certainly coming to town at a point where both look beatable.

Now, to be clear, I don't expect the Ducks to go in and really exploit this recent provincial "suckitis" -- Anaheim notoriously plays to the level of their opponents.  These will be knuckle-whitening games, I'm sure, but it is still an opportunity to go into the Olympics with some positioning advantage.  For the first time in who-knows-how-long, I can say this:  It's not impossible for the Ducks to end tonight in the eighth seed.

No real word on Getzlaf's return from injury  -- based on what I've seen, I'd guess it's "no tonight, yes tomorrow", but we'll have to wait and see on that.  Still the bigger story may end up being whether or not Vesa Toskala starts his first game for the Ducks this weekend.  Tactically, it pretty much makes sense -- Jonas Hiller has had issues with back-to-backs in the past and figures to stop a ton of pucks at the Olympics -- plus the night-two opponent seems beatable enough.

Of course it's only natural for Ducks fans to dread Toskala's eventual debut, especially when you read what Toronto fans are writing in their farewell pieces.  But I refuse to pre-hate or even pre-judge the guy until he officially flubs in a Ducks uniform -- even with his recent history of awfulness, it was only four years ago when the Sharks made Toskala their #1 down the stretch and they finished their season 20-6-3.  Playing goal for the Sharks definitely carries a different level of responsibility than playing goal for the Leafs, and the Ducks are probably somewhere in between -- let's hope that Toskala can put together a couple good starts for Anaheim down the stretch.  Maybe his Finnish teammates can encourage him -- Suomi!

Incidentally, I have added a Ducks blog on the sidebar from mighty Finland -- Hockey at Honda Center is written by a Finnish teenager who I've exchanged a couple of e-mails with (shockingly, the player who got him into the Ducks wasn't Selanne -- instead he's a huge Steve Rucchin fan).  The blog is pretty new but already has plenty of posts in decent English, and covers much more than just guys named Teemu or Saku -- check it out!

A Sleek prediction comes true?: Back in the days when I was employed by AOL FanHouse, I made a cartoony joke about a player taking the knife for cap purposes, never truly meant to mimic reality: 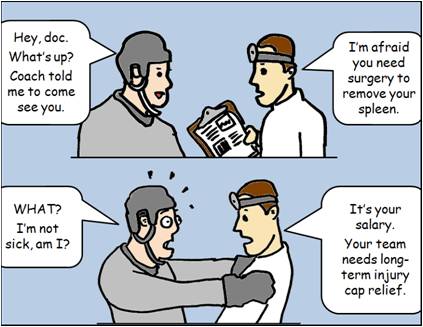 I do wonder what the future has in store for spend-happy general managers.  Will they ever get to the point where a budget-dictated surgery becomes a cap-cheating strategy?  It's unlikely, I suppose, but if it ever does happen, I hope they'll now cut me in on the cap savings.

Now jump ahead to yesterday -- it's quite possible that Kirk Maltby of the Detroit Red Wings might be doing exactly that:

In order to clear the last $700,000 needed (to activate Lilja), general manager Ken Holland said forward Kirk Maltby might go on long-term injured reserve because of a chronic shoulder injury that will, at some point, require surgery.

Way to take one for the team, Maltby.  Assuming that it's in the team's budgetary interest, get well soon.

Prediction: I'll be around for tonight's game, and we'll see -- I might make it home in time for tomorrow's third period, as well.  Hooray for Center Ice!  Ducks 8, Alberta 4.  Anaheim goes into the Olympic break smiling.