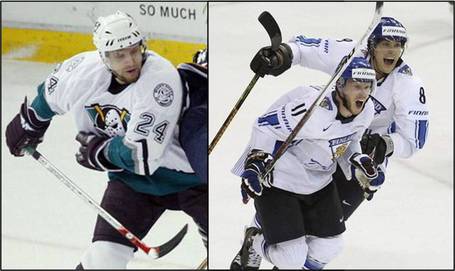 Ah, Mr. Salei, the pride of the Belarussian sector of Anaheim.

Curious Olympic Fact of the Day:  Who would have guessed, that if you compared the Olympic careers of former Duck Ruslan Salei to current Ducks Teemu Selanne and Saku Koivu, that "Salei of Game" would have the lowest penalty-minutes-per-game of the three?  I would have bet one million Belarussian kapeyek that Rusty would have led that arms race:

Anyways, should be an interesting day game today -- I'll be around for game comments (and probably for the late game as well).  If Ducks fans need any additional reason to root for Team Finland, consider this: I've been to Finland, and even went to the Olympic Stadium's Sports Museum, and I swear to you -- this was their hockey display -- made me nearly tear up with pride. 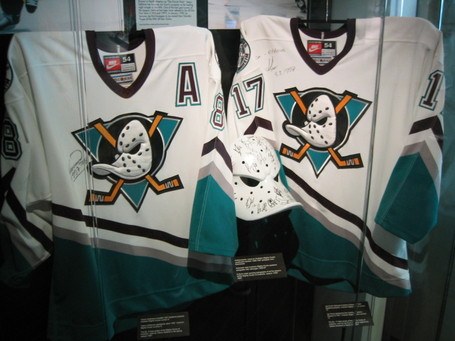 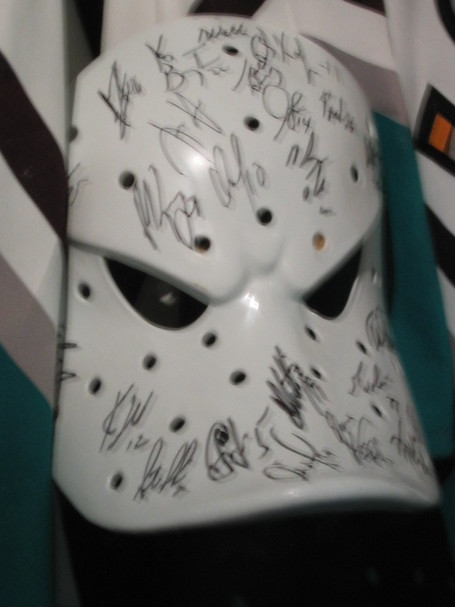 From the Finnish Sport Museum at Olympic Stadium in Helsinki:
Signed jerseys from the two hockey legends -- Teemu Selanne and Jari Kurri,
plus a signed Ducks mask from the entire 1996-97 Mighty Ducks team.

Finland's not ashamed of Disney or Anaheim, and thus I'm not ashamed to root openly for Finland.