For hockey fans, today is nothing short of Hockey Christmas (well, if Christmas happened once every four years) -- three meaningful games between six superstar opponents spaced evenly throughout a perfectly lazy Sunday.  In fact, I can't believe I had to get this fact pointed out to me by Jeremy "Asshat" Roenick, but it is amazing to think about -- today's schedule features rematches of each of the last three gold medal games.  Superstar rosters playing for national-pride revenge?  Fuck yes -- sign me up.

I got so excited I even drew a cartoon, though I've probably thrown too many elements into it -- it turned out to be a very busy panel.  I tried to make the hockey players as nation-neutral as possible -- didn't want to exclude anyone today: 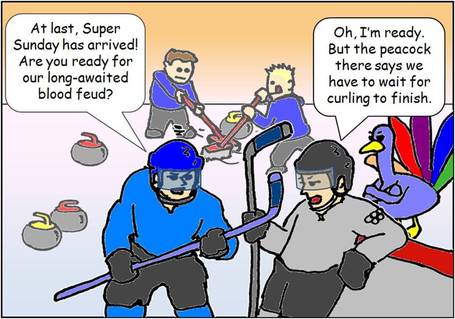 Dear NBC, please do not fuck this up today. Yours truly, Sleek.

Now of course Super Sunday's games don't truly have the importance of games next week -- none of today's games are elimination games, and no medals are directly at stake -- but it's not outrageous to say that today is the spectating climax of the tournament, and maybe of the entire hockey year.  There will be more talent on display today than in any All-Star Game, than in any Stanley Cup finals, or than in any medal game.  The players will all be desperate for victory, the crowds will be intense and involved, and best of all?  The results are all blissfully unpredictable -- all three games could really go either way.

So staple yourself to the couch -- Super Sunday is a rare supertreat for the hockey fan, let's enjoy the fuck out of it.

[Update 1 pm: Well, without warning, the west coast got fucking screwed -- no live TV coverage of the Czech-Russian game at all.  I'm calling this cartoon "Peacock Rape".] 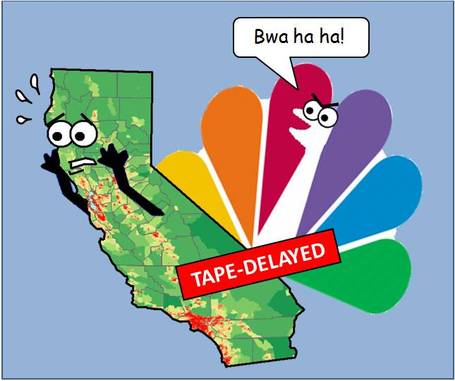 Prediction: It's Hockey Christmas -- no sense in predicting what presents we're going to get.  Instead, answer this question in the comments -- Which player would you most like to see carry his national team to victory today?  Who would be your ideal Super Sunday MVP?

My answer, of course, has a jaw bucket and a busted hand.