Enough with the round robin -- brackets have now been set and elimination rounds have finally arrived.  Like Rudy, I do have to feel a bit for Canada -- with expectations through the roof for this team, their having to play an extra game is pretty huge.  Sure, it's a game against winless Germany today, which is a blowout on paper, but with the pressure of an entire nation on their shoulders, there's no such thing as a "gimme game" for Team Canada any more. 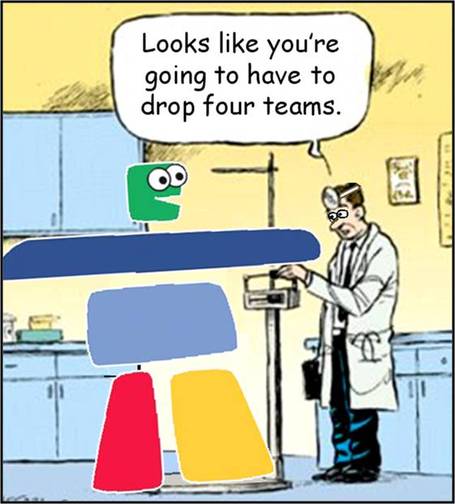 Ah, elimination.  I should note: This is a modified version of somebody else's cartoon.

Team Canada's problem, it seems?  Joe Thornton and Ryan Getzlaf have combined for only two points in three games -- they in particular were supposed to be a two-headed monster for the Canadians.  After the jump, the stats for former BoC players, and goaltenders, too.

I should note there's been a lot of hand-entry here, so let me know if there are any problems with any numbers (or if I've excluded any players).

Prediction: It'll be a scary day -- single elimination always is.  Top seeds all survive, but one of them requires a shootout to do so.  I should be around for commenting for the early games, at least.