Do you believe in NBC miracles?

Share All sharing options for: Do you believe in NBC miracles?

I cannot believe it -- we west-coast hockey fans might get to see a critical Team USA game on our televisions at the time that it actually happens!  No more Peacock Rape!  Steve Lepore, you're my hero:

The USA semifinal men’s hockey game against the winner of the Czech Republic vs. Finland will be broadcast live in all time zones on NBC this Friday at 3 p.m. ET.

Now, I fully won't believe it until it's actually on my television, but if this is true, it might bode well for Sunday's gold medal game (currently slated for a three-hour tape delay on the west coast) as well.  And if in fact I can watch the pivotal games of this tournament along with the rest of the TV-dependent world, well then I guess there won't be any need for this cartoon: 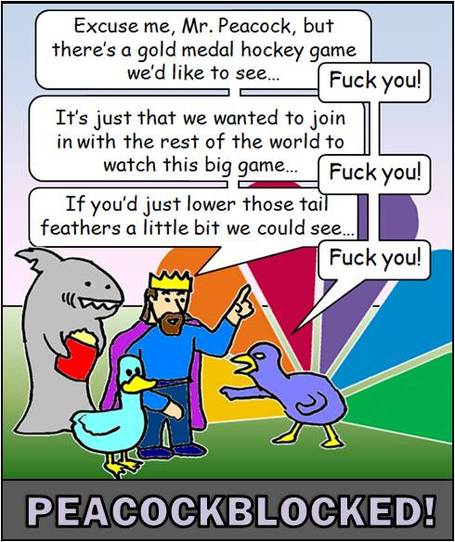 Please get this right, NBC.  Golympics!