Share All sharing options for: Olympic Gameday -- Brains vs. Bronze

In a lot of ways, this Olympic tournament represents the end of an era -- it's probably the last we'll see of guys like Jagr, Selanne, Palffy, Forsberg, Niedermayer, Fedorov, Stumpel, Lidstrom, Brodeur, Gonchar -- at least competing against each other on an Olympic stage.  And while tomorrow's gold medal game is largely being decided by youth, there's still something to be said for the dignity of these fading icons.  These guys, all once masters of their sport, still inspired, still competed, still led, still brought it.

This tournament isn't only about country vs. country.  Because the Olympics only occur once every four years, it's also about superstar players vs. Father Time.  As superstars begin to close down their careers, the national torch gets passed to a younger set of players, and every four years we get a snapshot of that cycle.

Tonight we'll likely see the last game played between two longtime BoC icons -- Teemu Selanne and Ziggy Palffy -- as both Finland and Slovakia prepare to put those heroes to rest.  Neither has had a particularly strong tournament (both are still goalless), but that's not to say they haven't been important.  Both their countries compete tonight to somewhat-unexpectedly medal, and the inspiration of the "last hurrah" for these two guys has to matter somewhat. 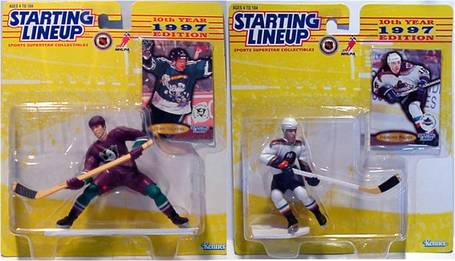 Another notable chapter in the Selanne-Palffy blood feud: rival toy sales in 1997.

To tell the truth, I am a bit worried about the future of the Olympics.  Not just whether or not the NHL will participate, but whether all countries can keep up with the torch-passing in Canada and the USA.  In both those countries, the youth has largely taken over, and on this stage at least they've already dominated.  In this tournament, no non-North-American team beat any North-American team, and that's saying something.

Russia and Sweden are still producing young scoring superstars, but beyond that it's starting to look thinner.  If you list out the current top 60 scorers in the NHL, the Finns have two player listed (M. Koivu and J. Jokinen), Czechs have three (T. Plekanec, V. Prospal, and T. Kaberle), and the Slovaks have one (M. Gaborik).  Some injuries have mattered -- Marian Hossa and Patrik Elias still are elite -- but by and large it's becoming difficult to spot the next Selanne, the next Jagr, or the next Palffy.  It's quite possible those players are out there -- my following of non-NHL hockey flat-out sucks -- but they aren't prominent just yet.

We definitely live in a special era of international hockey -- this whole tournament has involved a lot of coin-flip games between a lot of excellent national teams.  But it's possible that the future boils down to a more distinct "Top Two" or "Top Four" set of countries, making the tournament as a whole a bit less interesting.  As we bid farewell to some special names from the international stage, I can only hope that young players emerge to carry the torch for all these countries -- the more teams that can realistically win a tournament, the more special it becomes.

Anyways, let's all enjoy tonight one last Selanne-Palffy matchup tonight, and make sure to raise your glasses to each of them -- they are motherfucking BoC heroes.

Prediction: Selanne and Palffy each score their first goal of these Olympics.  I may be light on comments this weekend -- it looks like I'm having people over to watch both the bronze and gold medal games -- so play nice.  If Finland wins tonight, then the Ducks will come home with seven medals -- most of any NHL team.  If Slovakia wins tonight, then the Blackhawks will have six medalists, and each BoC team will have five.