(Author's note: this originally was going to be a rather lengthy farewell post to J.S. Giguere, but seeing that I've procrastinated a great deal in the past 24 hours, now it has transformed itself into a multi-part series, with most of it coming tomorrow and possibly beyond.  So don't use up all your kleenex reminiscing today, Ducks fans.)

I was talking to a buddy of mine the other day about the J.S. Giguere trade, and he shot me a fairly direct question: "So after it's all said and done, what is your favorite Giguere memory?"  It seemed a question that I'd have to ponder for a few minutes, but I was shocked at how quickly the correct answer jumped out of my mouth: "Uh, it has to be sweeping Detroit."  My buddy and I went ahead and listed out some of the alternative good time options -- Jiggy won a cup, ousted two #1 seeds, held the Minnesota Wild to one fucking goal in a conference finals -- but after we went through the options, my reflexive answer held.

Sweeping fucking Detroit -- the way Jiggy started his postseason career was probably the climactic moment of my hockey fandom, and to this day I still can't believe it happened like it did. 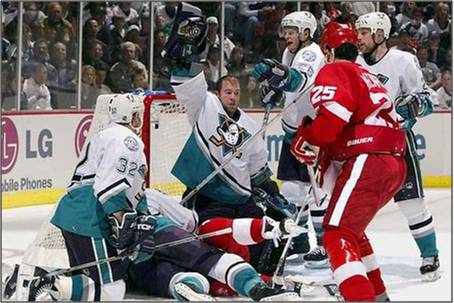 Going into that spring of 2003, the Mighty Ducks had finished their season well, but could only climb their way to the the seventh seed.  It was the franchise's third playoff appearance, and first since 1999.  Each of its previous two playoff appearances had ended the same way -- death by Red Wing, each time in a four-game sweep.  And wouldn't you know it?  Four years since their last appearance, the Mighty Ducks' first round opponent was fittingly that same Red Menace -- defending cup champions Detroit.  Another four opportunities for Anaheim to win its first ever playoff game against the cursed winged wheel.

And it wasn't just the reputation or stigma of Detroit -- their roster was legitimately unreal.  Yzerman, Fedorov, Larionov, Hull, Robitaille, Holmstrom, Zetterberg, Datsyuk, the Grind Line, Lidstrom, Schneider, Woolley, Joseph.   The Red Wings hadn't lost three straight games all season, and they were of course experienced -- all but three Red Wings on the playoff roster were making more than J.S. Giguere's paltry $900k that season.

For me, at least, it was a matchup that was seemingly over before it started -- my hope for the Ducks was simply to push the series to at least five games; winning a playoff game against Detroit would still be a first for Anaheim, and at that point winning the series wasn't even on the radar.  The Red Wings were simply too talented to be outplayed. 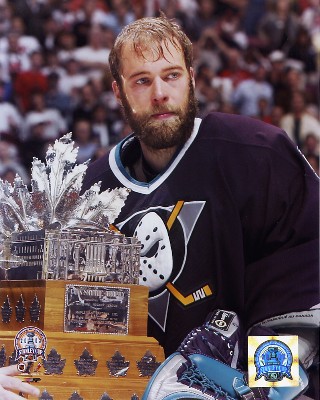 Over four games (with enough overtime to nearly make five regulations), the Wings threw 171 shots at J.S. Giguere, generally of typical-Red-Wing high quality, and only 6 of them went past him.  Jiggy was nails, and his .965 save percentage flipped the series on its ear.  Despite Anaheim scoring zero goals on special teams, despite scoring zero goals from their blueliners, despite allowing 20 shots in a single overtime period, despite scoring only eight goals in four regulations -- the Mighty Ducks won all four games, every time by a single goal.

It was amazing -- Giguere took the unthinkable and fucking did it.  He slayed the demon that had haunted this franchise since its postseason inception, and not just slayed it -- he swept it.  Peformance-wise and emotional-wise, I think it was my favorite Giguere moment -- what is yours?

Prediction: This game tonight seems pretty important -- I'll be around for game comments.  Ducks win despite zero goals on special teams and zero goals from their blueliners.  Oh, and if you haven't seen it, go check out Vesame Mucho's wardrobe video.  Suomi!