Share All sharing options for: Ducks Gameday -- Welcome to Exampleville

My first comments immediately after the Wiz hit:

Wisniewski is going to get suspended here, I imagine — this one’s pretty deserved.

I have no idea how the result of all that was 5-on-5 hockey.

I guess the refs just don’t care any more.

I mean seriously — James Wisniewski responds to a hit on Perry by flying in below the opponent’s goal line to deliver an elbow to the head?  Which immediately knocks Seabrook out?  And nobody in stripes seems to care?

This is like bizarro refereeing. They must have hit the green beer early or something.

Just so it's clear, I have nothing against the NHL suspending Wisniewski for his out-of-position slamming of Seabiscuit -- it was definitely stupid and ugly -- but still, I don't know who was expecting that he'd get suspended to a NHL-season-high degree.  Mirtle claims there have been 28 suspensions so far this year, with Wisniewski's being the first to eclipse five games.  Why this sudden leap in severity?  Uh... 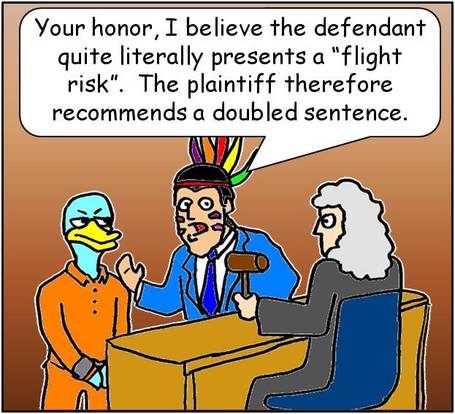 How I imagine things went in the imaginary NHL courthouse.

Still, whatever -- wins this season aren't terribly important any more (even if the Ducks end with the 10-2-1 from last year, they're still 73.9% likely to miss the playoffs), Wisniewski's summer raise probably just took an unsuspecting hit, and it's a lazy Friday -- I don't have much arguing energy today.  I would like to see the NHL get suspension-severe on another franchise someday, but I can save that for a year when Anaheim plays more competitively over the first 3/4 of the season.

Prediction: The Ducks are bizarre as ever -- lose every game after the Olympic break except against the best two teams in the west.  Unfortunately, the Islanders aren't that intimidating on paper, so the Ducks accordingly lose.  Inspired by longtime buddy Paul Kariya's 400th career goal last night, though, Teemu Selanne pots #600 -- that'd be fittingly awesome.