Anaheim Ducks (whatever) at Edmonton Oilers (whatever), 6 pm
Anaheim Calling and The Copper & Blue -- there's enough Post-Pronger Curse for everyone!

So I have sort of committed to a cartoon for each remaining gameday post, but for a change of pace I neglected to include a cartoon duck today -- its piss-poor effort is only alluded to here: 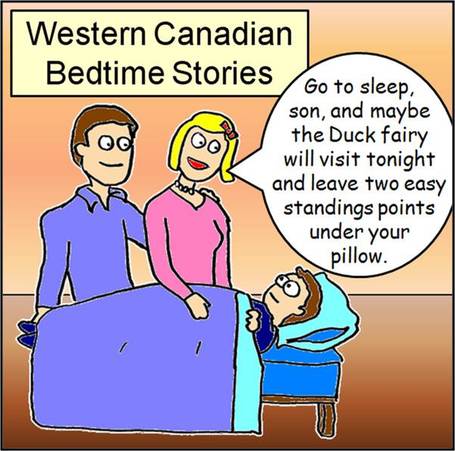 You'll note there's no clause included here about "if you're good".

Even though the games don't matter anymore, it's been a mind-numbingly horrid western Canada road trip thus far -- not much to suggest that the Ducks have been prepared to play either game, which is sadly on par with a lot of the rest of the season.  It's really begging the question of whether Coach Carlyle is the right guy to coach the team next year, as underperformance becomes a regularity these days in Anaheim -- but I'll save that for another post.  Or perhaps tonight's Ducks will talk me out of it.

For now, here's an early look at what the Ducks will be building around next year -- feel free to discuss in the comments. 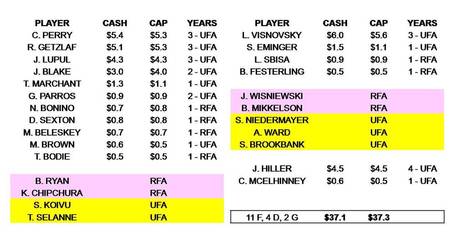 We're still largely in the dark about many variables, of course -- what next year's salary cap will be, what Anaheim's spending budget will be, the salary demands of the four RFAs, and what the offseason decisions will be made by Niedermayer, Selanne, and Koivu.  Still, it's somewhat clear -- the Ducks will have money to spend, but it's largely going to re-sign or replace the shaded free agents.

The real question, though -- what really needs to be done to ensure that the awfulness of the past two games doesn't resurface next October?  I'm all ears.

Prediction: I won't be around for game comments tonight; watching it on late-night DVR instead.  Ducks give away two points again, but Corey Perry scores an oddly-familiar goal assisted by Ryan Whitney.