Share All sharing options for: Kings Gameday: The Nuclear Option 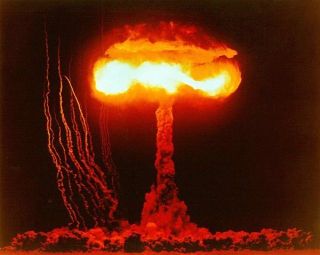 Jonathan Bernier was called up.  What does it mean?  I have no idea.  But I'm excited.  I don't know why.  Here's what it could mean:

1) The"Erik Ersberg Sucks" Option.  The Kings have a back-to-back tonight and tomorrow and they desperately need the points so they don't have to face Chicago or Vancouver or San Jose in the first round of the playoffs.  Jonathan Quick needs a rest and Erik Ersberg's life as a King pretty much ended when Marian Gaborik sniped a shot over his left shoulder in late December, so the Kings are calling up Bernier to play a game.  Then they'll pat him on the head and let him go dominate the AHL again.  This is the probable option and the boring one so we won't think about it.

(Oh, and Erik: you're going to want a primary weapon, a sidearm and a tertiary weapon.  I'd recommend a Scar-16S for your primary and a shotgun as your tertiary since you'll get a nice spray in the locker room.  Sidearms are about feel so you're on your own.  Play around, find one that's right for you.  You're going to want to go right to left and don't yank on the trigger; just squeeze it.  If you could be a sport and not harm Kopitar, Doughty, Simmonds and Frolov, and if you could only wing Dustin Brown and Matt Greene, that'd be great.  Good luck!)

2) The Miracle Option.  You have a team playing lackluster and not doing what they need to do.  One way to get them in gear is to put someone's job in jeopardy.  Quick has actually had his 2nd best month in March (2.56 GAA, .910 SV%, 2 SO) but the Kings aren't winning because they're not getting shots on net.  By calling up Bernier and acting like Quick might lose his job, the players in the locker room will band together and let management know that Quick is their man.  It's what Herb Brooks did before Lake Placid.  We need to get Terry Murray some of those pants.

3) The Nuclear Option.  Bring up Bernier and let him and Quick play an equal amount of games before the playoffs.  Let them fight it out.  This is the nuclear option because it basically blows up any chemistry the team has and irrevocably changes the shape of the room.  It's the ideal scenario if people were just automatons that had no feelings, but it's incredibly dangerous to do to humans.  I would have been all for it back in December or January, but it's too late in the season to make a big change right now... isn't it?  I believe Bernier is a better goaltender than Quick, but I don't think the players believe the same thing and they're most important.

As fans, we kind of have this idea that the best players should play the most.  (Crazy, I know.)  But players always have these weird ideas about veteran leadership and paying your dues and all that stupid shit.  I don't think the players would react well to a goaltender that has played almost every game for them getting benched for some new guy.  I don't think they would, anyway.  I don't know, maybe players don't give a fuck about goalies and just want them to stop the puck and shut up, but I think the team like Quick and wants him in net.

I always get myself all worked up about roster moves like this and usually nothing comes of it.  Murray will put Frolov on the 4th line and I'll seethe and then Fro will play 18 minutes the next game.  They'll call up Andrei Loktionov and I'll cheer and then Loktionov will separate his shoulder and ne'er be heard from again.  They'll play Randy Jones over Davis Drewiske and then... well, he's still playing over Drewiske but you get what I mean.  Bernier will likely play either tonight or tomorrow (probably tomorrow, since he played in Manchester's OT win last night) and then go back down to the AHL.  But that nuclear option is there, lingering in the background.  Duck and cover.

The Kings have been pretty atrocious offensively for a while now and I'm not sure what Murray plans on doing to fix it.  The Kings haven't just been failing to score; they've been failing to get any sort of offense whatsoever.  Since the NHL came back from the break, the Kings have only averaged 27 shots on goal a game, which would be last in the league if they played like that all season.  There's not a roster move Murray can make to change that, either; pretty much everyone has to play better.  The only thing I can think of is keeping the top line together, shifting Stoll back to a wing alongside Modin and Handzus, and then putting Frolov with Richardson and Simmonds.  Play Kopitar and Handzus against the top lines and then hope Fro-Rich-Meat can speed by the other team's third line.  Also, if our defensemen could pull their heads out of their asses and hit the GD net, that'd be great.

Prediction: Kings win, 2-1, while getting only 3 shots on goal.