Kings Gameday: I'm Just SO ANGRY All the Time

Share All sharing options for: Kings Gameday: I'm Just SO ANGRY All the Time

As I'm sure you already know, the Nashville Predators have a monthly competition to showcase a dog on the boards at Bridgestone Arena.  I've watched this competition with great interest because, c'mon, they're dogs.  Last month's winner was the fantastically named Tugboat, which you can see here: 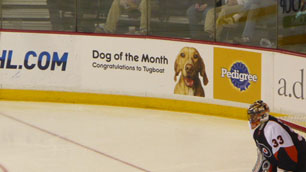 Now that's a dog.  He's got a great name, a sunny disposition and c'mon, what a great name.  Tugboat.  Think of the possibilites: you can call him Tuggernaut when he gets all excited, you can make little "Toot toot" noises to call him inside, he'll tear up a pillow while you're gone and when you find the damage you'll exclaim, "Damn you, Tugboat!" but then he'll come up with that hangdog look and you'll say, "Oh I can't stay mad at you Tugboat.  C'mon, wanna go lick peanut butter off my balls?" and he'll bark and you'll laugh and then the screen will freeze and the credits will roll.  It'll be awesome.

Anyway, Tugboat's reign is o'er and a new champion has emerged.  There's only one problem: the new dog sucks.  Meet Rufus: 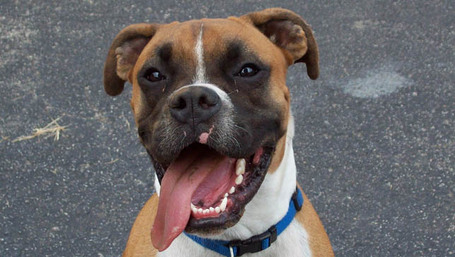 Jesus, try a little harder, Rufus.  Boxers, to a dog, are shitty, dumb animals and I suspect Rufus is no different.  (This is the only exception.)  The bigger problem, though, is that Rufus wants to look like a zany dog.  Tugboat is just naturally playful, you can tell, while this "dog" (if he even deserves such a lofty title) is obviously trying to be cool.  You gotta let it come naturally, man.  Rufus is the dog equivalent of Family Guy.  He's a dog you'd see on Two and a Half Men.  Rufus really liked the movie Paul Blart: Mall Cop.  Go fuck yourself, Rufus.

Even worse, though, is that Rufus beat this dog out for his prestigious crown: 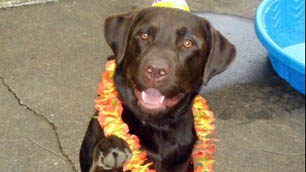 I mean, c'mon, it's not even a contest.  This is Billy.  Billy Badass.  Look at him!  He's wearing a fucking lei, how is this even up for debate???  This is a dog that just exudes coolness, not like that douche bag Rufus.  This is the type of dog that'll get you women at the dog park, the dog that'll win the surfing competition over those jerks from Phi Kappa Phi, the dog that'll eat an entire pie and then lie on the ground for 3 straight days.  Billy rules and I'll be fucked if I'm going to recognize Rufus as this month's winner.  Down with Rufus!  Up with Billy!  And Tugboat*, because he's awesome as well!

(You can see the rest of the past winners and runners up here.  How the fuck did Lily even make it to the top 3?  Smile you stupid dog, what's wrong with you???)

I think the hardest part about being a fan is that feeling of impotence when your team is sucking ass.  I'm not a great team player; I generally play inidividual sports and even when I play a team sport like hockey I'm the goalie, so I have some measure of control over half the game.  This inability to do anything, the inability to change anything, is killing me.  This feels different from past years, though, because I can't just say, "Aww fuck this team, they don't care," because that's obviously not true.  Dustin Brown cares.  Jarret Stoll cares.  Ryan Smyth cares.  Alexander Frolov cares.  They all care and they all have "heart," whatever the fuck that means.  The problem is, they suck right now.  Is it something flukey?  I hope so; I mean, they can't blow a 2-minute 5-on-3 every night no matter how hard Jarret Stoll tries.*  The past two games the Kings have gotten killed on special teams and you're probably not going to lose every night purely off special teams.  The Kings are going to break out eventually.  They're not a fluke, they haven't gotten lucky, they'll be fine.

*Stoll's shot attempts during that 5-on-3:

But the problem is, no matter how convinced I am of the above fact, I'm still scared.  I think we all are.  And I would be less scared if I were in the room, even if I were massage therapist or equipment manger, I'd feel more comfortable because then at least I could do something to help this team.  I want them to do well but I can't help them and it's killing me.  Jesus, is this what being a parent feels like?  Because this feels terrible.

And since I can't get mad at the Kings because it's stupid and irrational I end up getting mad at stupider shit that's even more irrational, like Mascot competitions and dog contests.  I'm throwing peas around and yelling at co-workers for making necklaces out of paper clips when they should be working.  I'm going to make some girl cry at my work by the end of the week if the Kings don't come out of it soon.  I'm so angry and the reason I'm angry is so stupid that it makes me angry.  I'm a Mobius strip of rage.

And the worst part, the part that doesn't make any sense, is that people supposedly get involved in sports to get away from the real problems in their life.  I do the opposite.  Goddammit, please win tonight.