Ducks Gameday -- How to SleekToon

Share All sharing options for: Ducks Gameday -- How to SleekToon

Anaheim Ducks (whatever) at Colorado Avalanche (whatever), 6 pm
Anaheim Calling and Mile High Hockey -- 4 out of 5 dentists recommend you click elsewhere.

Today, in keeping with the spirit of (a) entertaining you readers with cartoons, and (b) neglecting to talk about actual hockey, I've decided not only to double down on the number of cartoons for this post, but also give you a step-by-step walkthrough on how they are created.  Who knows -- maybe with some instructive steps I'll inspire some summer art.

I will note that several years ago I did make a post called Cartooning lessons from the worst cartoonist on the internet that goes through these same steps -- another resource to see the steps in the Sleek creative process, and proof that over a three year span I'm unwilling to learn a damn thing.

Step One: Come up with an idea for your cartoon.  Ideally, I like to have the whole joke/dialogue all sort of pictured in my mind's eye before I start -- that way it becomes easier to draw individual components of the cartoon.  But sometimes I'm stumped a bit -- I'll draw a cartoon and plan to write a joke later just in word bubbles (for example, I drew a Star and a Duck golfing before there was any real text joke planned).  This can at times be the toughest step -- I'm slightly envious of the model they're using at Pro Hockey Talk's Pucktales: O'Brien writes the cartoon, Gray draws it out.  But I've managed just fine in isolation, I suppose.

For today, with the Ducks' opponent as the Avalanche, I went down two paths.  It's always tough to come up with a proper cartoon representation for the Avs, so rather than stay consistent, I used a snowman for one and for the other I went with a yeti.  In both cases I had a pretty good idea what the result would look like, though.

Step Two: Draw the components for your cartoon.  As I'm a color-filler these days, I use a black sharpie on basic printer paper for drawing -- nothing terribly fancy there.  You'll note that I'm drawing different components of the cartoon separately -- it enables me not to worry so much about scaling or position.  That stuff can be resolved later on layout.  So for now -- draw it and scan it. 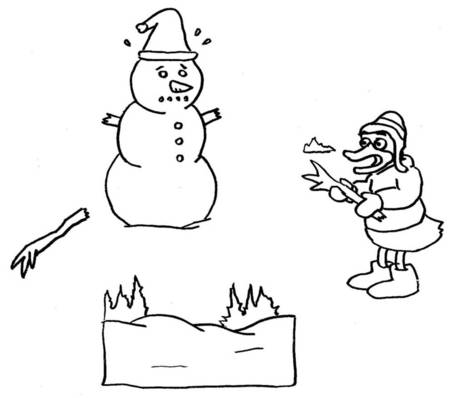 My sketchings for Cartoon #1 today. 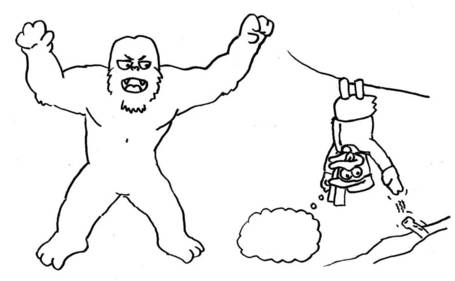 The start of cartoon #2.  Yes, some of it was drawn with the paper upside-down.

Step Three: Color in the components.  For this, I use good old MS Paint, which definitely has its drawbacks but at least is very easy, at least with enough practice.  What's really important here, aside from shading all your pieces, is to pick a unique "background color" -- one that you can turn invisible in the next layering step.  For me, I use a slightly-off-white; everything that I don't want to show in the final cartoon is shaded in that color. 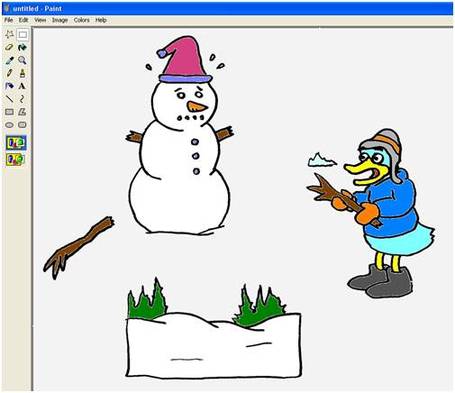 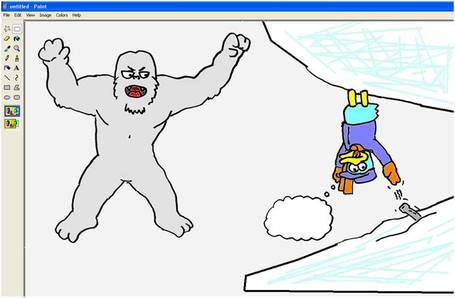 Step Four: Layer the components in MS Powerpoint.  Yup -- I keep technical requirements to a pretty basic minimum.  Powerpoint has a couple key tools, notably the "Set Transparent Color" option shown below.  It also allows you to place, size, and layer different components to get basically your finished product.  You can add stuff like word bubbles, other text, and borders pretty easily here as well, along with backgrounds -- my lazy trick is a shaded rectangle or two in the very back. 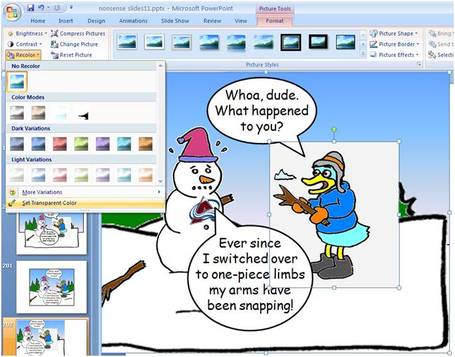 Putting the pieces in place, ready to "Set Transparent Color". 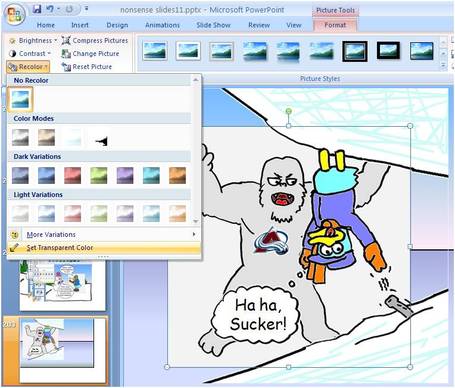 And the same for cartoon #2 -- text added to thought bubble, too.

I'll note here that if you really cannot draw (a legitimate obstacle), you can do all this with internet-stolen photographs, as well.  The trick there is to color around an object in MS Paint, then use that object in MS Powerpoint similar to the tricks above.  See my old instruction post for a more detailed breakdown of that.  For today, I decided to drop an Avs logo (snagged quickly from the internet) in each of my cartoons -- it helps easily identify the non-duck player as the Avalanche character.

Step Five: Save your finished product.  Select all your Powerpoint objects at once, and either drop it all into MS Paint to get it back to one image, or just "Save as Picture" on the whole group of objects.  I save as a jpeg, but I don't really know any better -- it's an easy option.

Here's both of today's finished products: 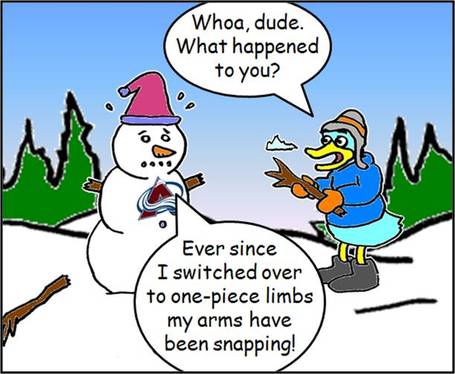 One scathing commentary on one-piece hockey sticks, coming right up! 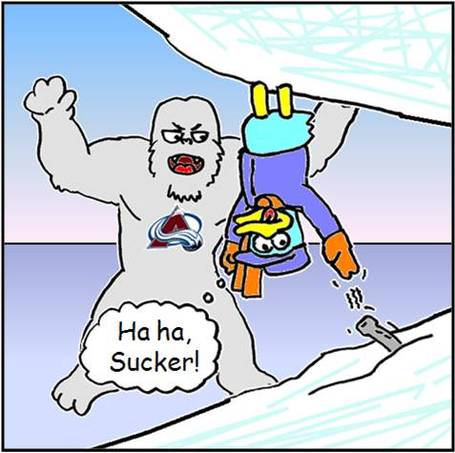 Did anyone order an Empire Strikes Back re-enactment?

So there you have it -- among cartooning methods available on the internet, mine is neither the easiest nor the best, but at least the software demands aren't very rigorous, and I'm never terribly unhappy with results.  If you'd like to try your hand at it and run into any problems or questions, feel free to e-mail me (there's a link at the bottom of the page) -- I've been doing this quite a while (quick hint: "Undo" is Ctrl-Z).

And for sure -- if you do make anything, no matter how crummy, and want to display it during the offseason: Fanposts are always open -- let me know if you want me to upload your picture for that.

Prediction: Ducks 4, Snowman Yetis 2.  I should be around tonight (unlike Jonas Hiller); feel free to stop by and game chat.