Introducing Another Writer Who is Inferior to Me

Share All sharing options for: Introducing Another Writer Who is Inferior to Me

Mike Chen has moved on to bigger and better things because he is apparently too good to write on the 5th most popular intrastate multi-team humor hockey blog on the internet so we have decided to bring in another writer to mock when the Sharks inevitably lose in the first round.  My friend Megalodon has been a frequent collaborator and co-conspirator on a lot of the stupid shit I've posted here.  (He helped write this and this.)  He decided to help us outand start posting about the Sharks while somehow missing the obvious signs that Joe Thornton is gay.  This is both good and bad; it's good because he's funny and cool and he has immaculately combed pubic hair (it looks like the Monster's hair after Bugs Bunny combs it in this cartoon.), but it's bad because it means you'll have to scroll through more crap to read my work and it's also bad because you're going to notice how blatantly I've been stealing his jokes through the years.  He'll have his first post up soon and it'll probably suck, but for now feel free to embrace optimism.

I've known Megalodon since my first night of college, when we were placed in the same dorm suite because we were both dorks who like hockey.  We quickly bonded over Futurama, Hunter Thompson and making fun of people who'd beat the shit out of us if they knew we were mocking them.  It's been a wonderful partnership ever since.  He doesn't drink and this has been a source of great stress on our relationship since the moment I met him.  (It's like having a friend that can only breathe under water, or another simile that makes sense.)    The two of us once made a 125-point list listing ways in which a roommate of ours sucked.  He's afraid of sloths.  He once woke up to find me peeing in his trash can.  He has a cat named Chandler who hates my guts and tries to kill me every time I visit.He can't quite do a backflip.  He despises Ed Belfour.  Also... 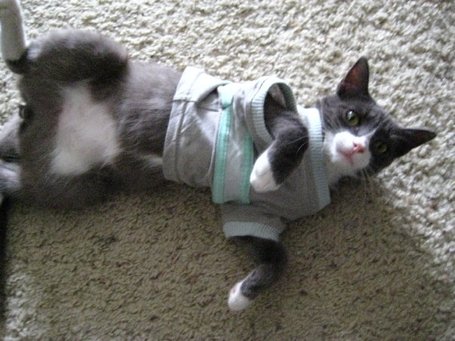 Stay the fuck away from my legs, Devil Cat!

Meg should fit in pretty well, as he has a slightly different comedic style to Earl and myself.  While Earl doesn't try to be funny (He does?  Are you sure?) and I tend to be dumb and pointless (Tugboat!), Meg is all pithy and, like, smart and shit.  He likes Monty Python, is what I'm trying to say.  More importantly, he despises Family Guy and Napoleon Dynamite and Juno and all that stupid shit, so he should fit in just fine.  Or he won't and we'll jeer at him until he quits, right?

(Picture Tip: When looking on Google Search for a picture, DO NOT search "This guy sucks."  Jesus Christ.)

In summation: Mike's gone (kinda; he may show up every once in a while) and he'll be missed by... someone, I'm sure.  The Sharks suck and Meg sucks.  I rule.