Happy Friday, everybody!  Time to put on your thinking caps!

A little more than a month ago, I did an exercise comparing Jason Blake and J.S. Giguere's contracts, to show how the "Rich Dad" cap perspective of Toronto differed from the "Poor Dad" cash perspective of Anaheim.  The basic idea was that since Toronto was restricted by the salary cap ceiling, they cared about the averaged salary of a player's contract; since Anaheim was not cap-restricted, they cared about the actual cash payouts due a player.  Since Giguere's contract was ascending and Blake's contract was descending, the two teams were able to find a "currency exchange" where both teams saved money in future spending.

Today I wanted to look similarly at how Lubomir Visnovsky's contract compares against Ryan Whitney's (numbers courtesy of Capgeek.com).  Again, I should throw in the usual caveats: this exercise flat-out ignores how good or useful either player will be for their new team -- it's purely to express one incentive that exists in considering why either team made this trade.  Again, Anaheim is the "Poor Dad" -- they have no intention of spending to the cap ceiling.  Edmonton this time is the "Rich Dad" -- despite awful results, their spending is constricted by the salary cap ceiling. 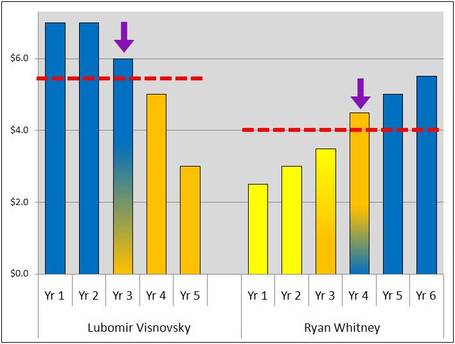 To the left I've plotted the current contracts for Visnovsky and Whitney, and I apologize that it's a convoluted chart.  The height of each bar represents the salary each year of each contract, and the dotted red line represents the salary cap hit for each year of the contract.  I have colored each bar by team -- blue bars are years  when Edmonton paid the player, orange bars are years when Anaheim paid the player, and yellow represents Pittsburgh.  The purple arrows show you which year is current.

Of course, it's tough to call anything these days a "win-win" with Edmonton.  Lowetide has been on top of this, as always -- they're still so salary-tied that they're pretty fucked for next year, too.  So it probably isn't that important that Cotton Gin measure up to Lubo this year, or next year, perhaps -- that final year, can Whitney improve enough to pay off when it matters for the Oil?

It's quite possible; it may even be a solid bet -- I'll do a "Farewell Whitney" post this weekend.  I did want to add one kudos to Bruce Banner Bob Murray, though -- it does seem to me that there are lots of "Poor Dad" teams out there, but few seem to be picking off currency exchange opportunities the way Anaheim is lately.  Also, very nice of him to pull the deal at the very end of the trading day -- that way there was no opportunity for the Kings to get their revenge and to vindictively trade for Sammy Pahlsson.  I don't even want to know what I would have done if that happened. 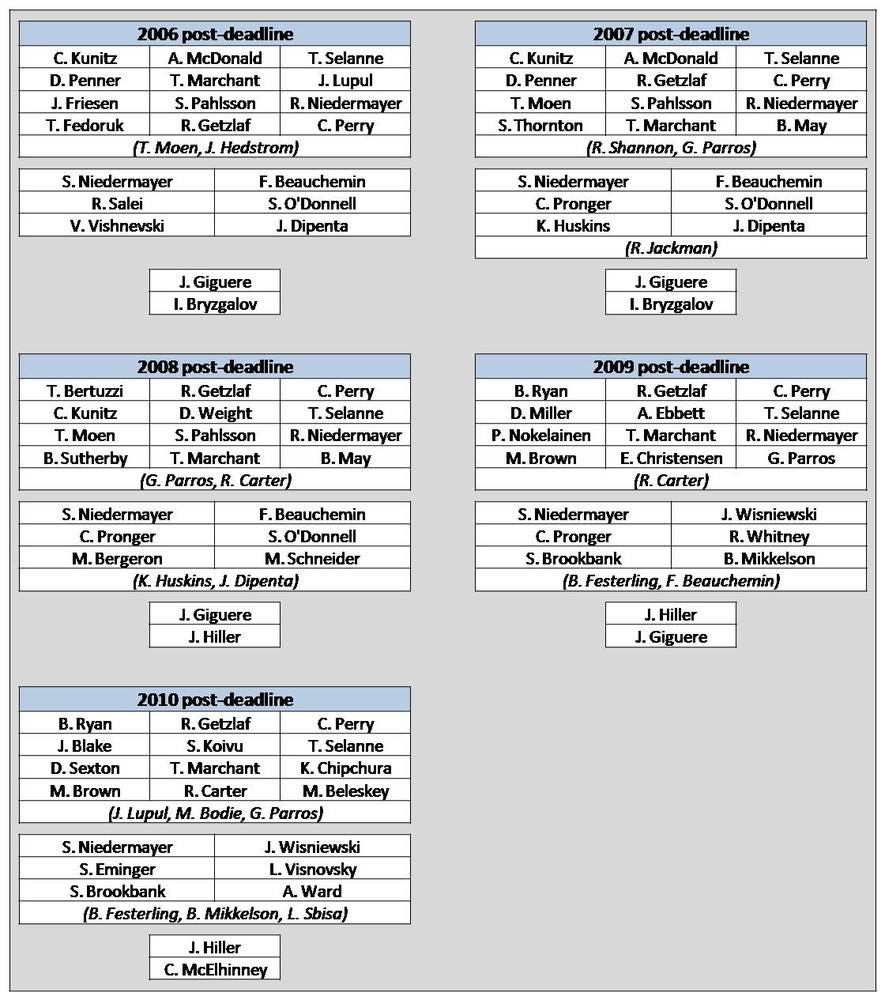 One of the true benefits to being a long-time blogger is the wonder of archives -- my memory may be going to shit, but it's quite easy to go back and find old notes and whatnot.

So mostly by copying and adding to what I posted last year, here's how the Anaheim Ducks have looked coming out of the past five trade deadlines (it's an annual process).   I like snapshotting the roster at this point in time, particularly, because it's probably when things are most essential -- these are the rosters that play the important playoff games.

Now I'm not particularly careful about depth and I'm particularly careless about right-side vs. left-side, but it's still a nice ability to scan year-to-year roster changes.  The five guys who have made all five lists are of course Selanne, Marchant, Getzlaf, Perry, and Niedermayer -- nice that these franchise warriors can go down the stretch one final time.

Feel free to nitpick any of my listings, or reminisce about any of the particular stretch-run rosters.  The Ducks have 19 games left to get into the playoff picture -- here's how the last four Ducks teams finished over their last 19 games (hint: impressively):