Today's the day when I try to properly bid farewell to Ryan Whitney, and I tell you -- it's a bit tricky.  Ducks fans who have lived through Cotton Gin's turnovers and soft defense are of course thrilled to see the big guy gone, and I'm ecstatic as an incoming-Lubo fan (salary cap analysis here), but it's difficult to peg exactly how big a problem Ryan Whitney really was for the Ducks.

The thing about watching Ryan Whitney play is that mostly what you end up noticing is what isn't there -- he's never quite the sum of his parts.  Sure he's a hulking 6'4" but he doesn't really hit anyone.  NHL.com might tell you that he's thrown 71 hits for the Ducks this season, but they aren't noticeable -- he's a pokecheck-first kind of guy with a lot of reach.  And yes, while he does seem offensively-positioned and does shoot pucks towards the net, but they never seem really threatening or dangerous, and frequently can come the other direction.  His decision-making is sometimes suspect, and when he gets caught flat-footed in the wrong spot, he really gets caught -- he has taken more minor penalties than anyone not named Getzlaf or Perry (sigh -- hate that they're the standard).

Speaking of Perry, here's the last moment Ducks fans will remember of Ryan Whitney playing hockey while under a Ducks paycheck: 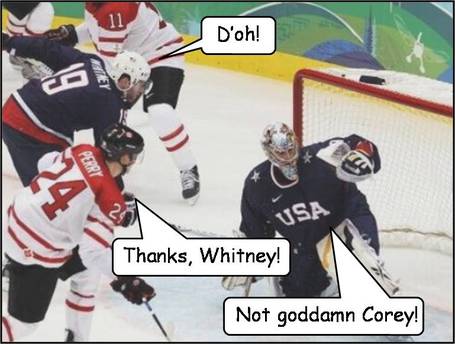 Ryan Whitney played only 2:57 of the gold medal game -- I'm guessing this was his final shift.

Despite his glaring giveaways, though, it really hasn't been all bad for the Cotton Gin -- five games into the season when everybody was bleeding on the shot chart, Whitney was one guy doing pretty well.  He was outscoring opponents 5-1 and only getting outshot by two shots at even-strength (Scott Niedermayer, by comparison, was being outshot by 29 shots at the time).  When I looked in December about who was partnering well with Niedermayer at even-strength, Cotton Gin again did pretty well -- he wasn't responsible for the bulk of the captain's minuses or negative Corsi.

And in looking over Whitney's season this morning, there's one stretch of games that really caught my eye -- I really don't know what to make of it.  For a one month stretch, from December 29 through January 27,  Whitney played 16 games, had zero points, and was a minus-13.  If you can find a way to explain away those 16 games, Whitney's numbers suddenly look very impressive: 46 games played, 28 points (13 on the power play), and a plus-seven.

So WTF happened in that suck month?  Not sure, but a closer look after the jump.

I went to Vic Ferrari's timeonice.com site to dig in a little deeper -- there you can segment games according to date range.  Here's how Whitney's 5-on-5 on-ice shooting numbers looked before the bad month, during it, and afterwards.  Note that these results exclude empty nets.

It's really quite an amazing dip there in the second row, and I can't find anybody else to blame except Whitney -- six other defensemen played for the Ducks over that one-month stretch, and I checked them all.  All had worse goal differentials, shot percentages, and corsi percentages when paired with Whitney than when paired with somebody else.  Cotton Gin was the suck, and this doesn't even consider his zero points on the man-advantage during that month, either.

So really, I think there's two main questions here: (a) What the fuck happened to Cotton Gin at the end of December and why did it hurt his numbers so?  Could it really have been pressure to make (and break) Team USA?  Is there a way to explain the awfulness away?  (b) If so, then what sort of player do the Oilers have in Ryan Whitney going forward?  He's obviously not as awful as that one month, but it's not fair to outright exclude those results as just a statistical hiccup, either -- his post-slump numbers haven't fully recovered to his early season rates.

I really have no answers here -- I'll open it up to theories in the comments.  But I think the point remains: Ducks fans may be glad as hell to see Whitney gone, and certainly that can be justified by the fact that Cotton Gin played an awful month of hockey in the middle of a battling season, but the fact remains -- the guy still contributes.  The price of quality defensemen always seems to climb in this league, and Whitney could prove quite the bargain for Edmonton before this trade is played out.  We all know he has the tools, he may someday soon be the sum of his parts, but even so -- Ducks need wins today, and he's not there yet.

Godspeed, Cotton Gin.  You had your flaws, you made us curse a bunch, and we made fun of your Olympic blog and Team USA performance, but no matter what, you did eliminate the Sharks -- that makes you unequivocally awesome in my book.