Rudy: Think the Kings should try Fro with Smyth and Kopitar?

Nut: Exactly what I was thinking

Rudy: Brown's best on the rush, he should be with Richie

Nut: Apparently we had the exact same idea

Rudy: You can be my Jamie Kompon when I get hired.  [My sister] will be Mark Hardy.

Nut: Fuck you, you can be the Ron Hextall to my Dean Lombardi.

Rudy: You're the Patrick O'Neal to my Bailey.

Nut: I'm the Nick and Rich to your Jimmy and Darryl.  Wait, that means we both suck.

Rudy: That's the most truthful.

What happened with Anze Kopitar and Dustin Brown?  They used to be best pals, partners, like Chip 'n Dale.* Now they're completely out of sync, useless together, like any two people on Bonkers.  (Fuck that show.)  But why is that?  What's going on?

*Did anyone else call Chris Drury and Ryan Callahan the Rescue Rangers during the Olympics?  Just me?  OK.  I need to e-mail Jim and Joe from Blueshirt Banter about that, see if they'll make T-shirts.  Oh, and in case you're wondering: Marian Gaborik is Gadget, Sean Avery is Zipper, and Olli Jokinen is Monterey Jack.** 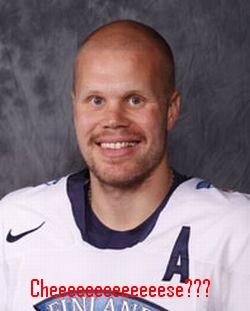 Probably the biggest reason Kopitar and Brown no longer work together is that they now play contrasting styles.  If you'll remember, Kopitar played with Brown for two solid years when he first came into the league and both of them set career highs in scoring while playing together.  Of course, that was when Marc Crawford was the coach and Kopitar was not required to do pesky things like play defense.  Now that Kopitar is usually the last forward leaving the zone when the Kings break out, Brown usually has to either create a play all on his own or pass it to Ryan Smyth.  I will admit Smyth is good at some things (making me mad, for one) but he is probably the worst one-on-one player on the Kings.  Brown doesn't really have any options that fit his skill set so he's reduced to clanging the puck against the glass with a desperate shot.  It's not that Brown has changed since he scored 60 points two seasons ago; it's just that this system doesn't play to his strengths.

Smyth will usually take the puck into the corner and try to work it to Kopitar on the halfboards; from there, Smyth will go to the front of the net while Kopitar works for a shot while Brown... doesn't really know what to do.  Usually that third guy would be behind the net and would try to rotate for a shot, but that's not really Brown's game.  Brown is usually the one going to the net, where he can use his balance and positioning to work for a shot from about 3 feet out.  If he tries to do that now he'll run right into Smyth.  Brown can't really try to work the puck behind the net because he doesn't really do that well handling the puck in enclosed spaces.  It's like buying a bull and then asking him to make tea.  (Yeah, exactly like that.)  Again, it's not that Brown isn't playing well or anything, it's that he's being asked to do things he has no idea how to do.

Ultimately, the best person to play alongside Kopitar and Smyth is Justin Williams, because he can create on the rush and in a half-set, but until he's out the Kings are going to have to do the best they can with what they have.  The best solution, to me anyway, is to put Frolov on the "right side" with Kopitar and Smyth.  (It doesn't really matter on that line since Smyth usually parks himself in front of the net anyway.)  I think Frolov would do well on that line since he's fantastic at working the puck down low and he and Smyth should be able to create some nice chemistry.  Plus, I think Fro would like it if he had a chance to actually break the puck out every now and again.  Put Brown on a line with a speedy guy like Brad Richardson who can work with him on the rush and a shooter like Jarret Stoll and let him be aggressive again.  I think it'd work.

Rudy: Bob has shingles I guess.  Seems like a roofer could clear that up for him.  Heyoo!

Rudy: It's chicken pox virus but no chicken pox, I guess?  You get a rash on half your body.  Doesn't affect his voice, don't know why he's being a pussy.

Nut: I bet he watched and laughed his ass off.

Rudy: It's all an elaborate plot to get Jimmy fired.  He's been trying for years.

Nut: Ya I like the idea that Bob secretly hates Jimmy.

Rudy: Me too.  It's like Dwight and Jim except if Jim had Andy's personality.

Nut: They should have gotten Jimmy to announce the Oscars.  "And now here's!  AlecBaldwin."

Rudy: Haha yeah, with Bailey as the escort person.

Nut: Why do all our conversations come back to Bailey?

Prediction: Kings win, 3-2.  Or they don't and play like shit.  Whatever, these guys have been pissing me off lately.