There are only a few days left before the most wonderful time of the year - the Stanley Cup Playoffs! Some of our dear readers may be unfamiliar with the history behind the grueling struggle for sports' greatest trophy. As a public service, we here at Battle of California have scoured the most authoritative sources we could find to bring you a brief history of the Stanley Cup. Please enjoy, and make sure to take notes.

Lord Stanley of Preston is a mysterious and controversial figure in Canadian history. As the sixth general governor of the British province then known as "New Lumberton," Stanley’s first official act was the forced relocation of all convicted and suspected criminals, vagabonds, and pederasts in the nation to a centralized "prison-city." Today this fearsome locale goes by the name "Winnipeg," and is best avoided by all but the bravest of men.

Stanley’s tough-on-crime stance made him wildly popular among the non-criminal/vagabond/pederast population of Canada, and the grateful citizens began to put on violent displays in his honor. These bloody gladiatorial contests were the precursor to the game we today know as "hockey." Originally, drunken men from each province would converge on a frozen pond to battle one another with sharpened sticks and boots with knives strapped to them. Today the sport is mostly unchanged, though modern sticks are rarely made of wood.

Lord Stanley reveled in the bloodshed, and quickly moved to enshrine these contests as an annual tradition. Seeking guidance, Stanley

went deep into the northern wilderness and meditated for seven days. When he emerged he proclaimed that he had been visited by a spirit which had granted him the official rules of hockey. He engraved these rules on two great stone tablets, each precisely 3.7 meters high, and left them in the city square of Moosejaw (the nation’s capital at the time). Each year the major cities around Canada were ordered to send their strongest young men to battle one another for Stanley’s amusement.

The Stanley Cup was designed by the general governor himself. He ordered seven of the nation’s finest silversmiths to each produce a Grail based on his exact specifications. He found flaws with six of these faux-Cups, and each was cast into Canada’s largest volcano (along with the silversmiths). The seventh Cup was perfect, and in gratitude Lord Stanley granted the final silversmith dominion over the province of Quebec (the man politely declined).

The size of the cup is a story unto itself. It is a mostly-forgotten fact that Stanley’s mother was a North American Sasquatch, standing twelve feet tall and weighing over a ton. Lord Stanley himself inherited her size and taste for raw meat, though he was slightly less hairy. The Cup was crafted to fit his gargantuan hands, and it served as his standard drinking-vessel until he vanished in 1914. 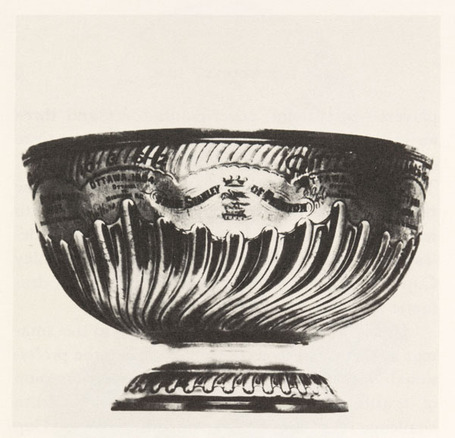 In his personal life Stanley was a dedicated Freemason, and he included much of that organization’s symbolism in the crafting of his Holy Grail. The crown engraved on the cup itself is, of course, a reference to the secret Masonic Monarchy that governs world affairs. The thirty-three ridges near the crest symbolize the thirty-three stated "Goals of the Masons" (hence the tendency to refer to Masons as "Tenders of the Goals"). According to prophecy, the names engraved on the Cup’s lower rings form a complex code that, if deciphered, will reveal the winner of Big Brother 15.

Ironically, the original role of the Cup was for it to be presented to the LOSING team. These men would be required to commit ritual seppuku as a penance for dishonoring their province, and their failure-tainted blood would be collected in the cup and boiled. Obviously this practice would be frowned-upon today, which is why it was discontinued in 1982; since then the Cup has served as more of a traditional trophy.

So now you know the true story of Lord Stanley’s Cup. Enjoy the playoffs and stay tuned to Battle of California for more exciting and informative hockey coverage!