As everyone knows, Southern California is the greatest place in the whole wide world.  From Valencia to San Diego, from the coast to whatever city is right before Riverside, Southern California has the best food, the best girls, and the best hockey bloggers.  Most other cities are unable or unwilling to duplicate the awesomeness that is Los Angeles, but one city comes close: Vancouver.  Vancouver is a city eerily similar to Los Angeles: they have great weather, access to both the beach and the slopes, hipsters, gays, minorities, a bustling film industry, and a good hockey team.  Of course, everything's Canadized: their film industry specializes in woody exteriors, their weather is more marine west coast than Mediterranean, their hipsters wear flannel and denim unironically. 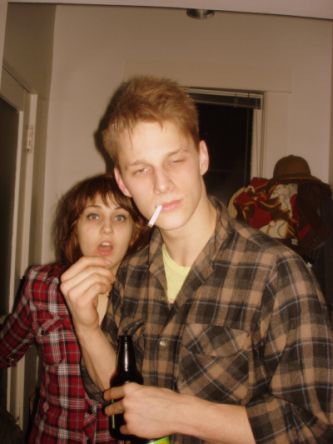 Hipster, or Canadian?  The world may never know.

But still, Vancouver is generally a pretty cool town, albeit only because it vaguely resembles Los Angeles.  It's kind of cute, actually, how badly they want to be LA.  They're kind of like Branson to our Las Vegas, the Elmo to our Grover, the Nucks Misconduct to our BoC.  I'm sure we'll see thousands of fans in Vancouver dressed up in Hollister apparel and pooka shell necklaces, their frosted tips blowing in the cool Canadian air, trying desperately to imitate the fashions they think are popular in LA.  They're never going to be as awesome as LA but they at least recognize they're inferior and I for one appreciate it.

But enough about how great LA is; let's talk hockey.  There you will see more similarities between LA and Vancouver.  Both teams joined the league around the same time, the Kings in 1966 and the Canucks in 1970.  Both teams have spotty records (the Kings have a .47 winning percentage, the Canucks a pathetic .46) and their histories have been marred by poor play, bad coaching and unfortunate jersey choices.  You could refer to them as the Canadian Kings, or us as the California Canucks.  We even had our hopes crushed in consecutive seasons, us in '93 and them in '94.  Yes, there's a kinship between the two fanbases.

Or at least, there was, before I decided I hated the Canucks.  (This was about 20 minutes ago.)  For being on the West Coast their fans are incredibly pompous, especially when you consider that they cheer for this.  Their best players, the Sedins, look like idiots, which is odd when you consider that they can actually see themselves look stupid every damn day.  They look like a retarded Anthony Edwards.  The twins always have a goofy expression on their faces, a cow-like docileness that really makes me want to punch them in the face.  Oh well, I guess I'll have to let Jack Johnson do it for me. 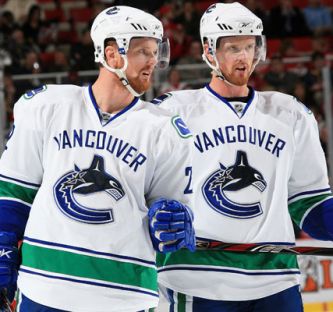 Pow!  Right in the kisser.

The rest of the team is comprised of players who would look more at home on a soccer pitch than an ice rink and the only thing they have that passes for toughness is Rick Rypien, who I could totally beat up.  The other "tough guys" they have on their team are divers and cheap shot artists and I hate them all.  They're backstopped by a Miata-driving meatball named Roberto Luongo, who is a pretty good goaltender and a terrible referee.  Overall, they're a shitty, miserable team that doesn't deserve to live, let alone move on to the 2nd round.

Unfortunately, they're better than us and will move on to the 2nd round.  Oh well, no big deal.  Rather mourn in paradise than celebrate outside the pearly gates.