Sharks Gameday: The World of Tomorrow

Share All sharing options for: Sharks Gameday: The World of Tomorrow

Hey, it worked! It's me, Megalodon, FROM THE FUTURE!

I have gained access to the world's first time machine, and I've returned to this time of great trouble to give solace to my fellow Sharks fans. Let's get started!

First, do not despair! I remember how I felt on that day, so long ago, when the Sharks lost game one against the Avalanche. Team Teal's offensive effort was pitiful and uninspiring, and our biggest heroes looked frail and powerless.

But rejoice and have hope, Sharks fans, because better times are ahead. The Sharks win the next game, and the next, and go on to win the series in five games! It's glorious!

How do they turn the series around so dramatically, you ask? Read on!

The President of Time hasn't authorized me to tell you Pasters too much, but I can share a few tidbits with you without doing too much damage to causality. Here we go: 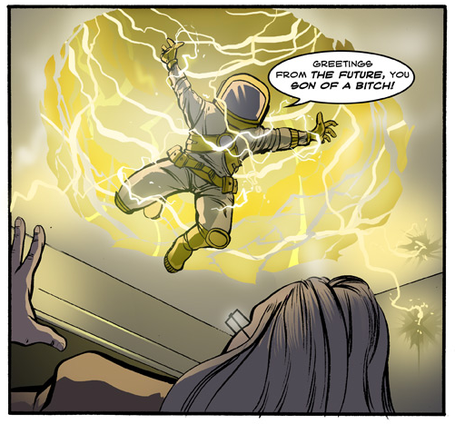 1. It all starts with some line shuffling. The Sharks' big three are all struggling at the same time, and the line that needs to be the team's best isn't a factor at all. The coach responds by splitting up the team's formidable offensive weapons and rewarding the hard-workers from game one with more ice time. The lines aren't set in stone, but we see instant chemistry between Marleau and Setoguchi, echoing their success earlier in the season. Thornton starts clicking with Clowe, and the checking line brings more of their impressive play from game one. The team suddenly starts looking like what it is: an immensely talented group of hockey players.

2. The team shoots a LOT. Craig Anderson is a good goalie, but he's still vulnerable. One of the keys to the Sharks' success since McLellan took over has been to fire the puck at the net early and often. Anderson was showing signs of fatigue late in the regular season, and a combination of more shots and more crashing the net will expose those cracks once again. And once the Sharks get a couple of goals, the Avalanche don't stand a chance.

3. The team mixes up their attack. The dump and chase, they flip it in on goal, they let Dan Boyle carry it up - they communicate and think on their feet and pressure the Avs' weak defense until it starts to crumble under the superior size, speed, and talent of the Sharks' forwards. The Avalanche blueliners are confused and tired - it's a thing of beauty. Adam Foote cries and wets his pants.

Other than that, the team just keeps up what they did well in the first game: Evgeni Nabokov is solid and the defense doesn't allow itself to get worked by the Avs speed. With all these parts in place, the Sharks start to play with a confidence and swagger that befits a team of their record. They fly into the next round ready to keep it rolling and face anyone who dares stand in their way.

I hope I've been able to ease some of your concerns, my teal brethren. It seemed like the only proper thing to do, seeing as how it was a group of Sharks fans that invented the Time Machine in the first place. We're good with computers and such, you know.

That's all the time we have for now - I've got to go. Hitler ain't gonna kill himself.

Postdiction: 4-1. Two from Marleau, one from Clowe and Setoguchi. That's how it goes down - you can take it to the bank.