***UPDATED - Kings and Ducks fans, please watch the video of Rob Blake's hit on Galiardi (posted in the comments) and let us know if you think it was dirty or suspendable.*** 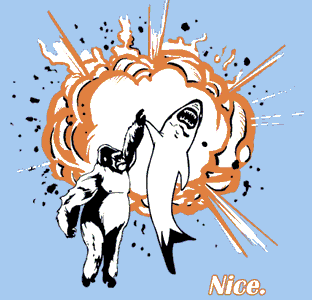 As good as I feel right now, this was a rough game. There was a LOT to be upset about. Let's talk about that first.

Finding the Dark Cloud inside the Silver Lining

1. Evgeni Nabokov - He was not good. The first couple of goals were completely not his fault, including the bad bounce, the breakaway, and the 2-1 down low. It seemed like he got a little rattled after that, because for most of the middle of the game Nabokov was WEAK. I was glad to see him turn it around in OT, and he definitely saved the Sharks a couple of times...but with a stronger game throughout from Nabby, OT wouldn't have been necessary.

2. Douglas Murray - I love Murray. He's awesome. But he had a TERRIBLE game. Half the time he was trying to hit people at the expense of defense** and the other half of the time he was trying to be Dan Boyle. It was maddening, and led directly to at LEAST two of the Avalanche goals. I hope he picks it up and settles back into his normal role as a solid D-man who can deliver a big hit without taking himself out of position.

3. The No-Goal Call - That goaltender interference bullshit was a travesty.

But enough negativity - what a fucking incredible, insane, absolutely ridiculous game. I seriously think I may have screwed something up with my time machine, because there is no way those were the same two teams that played game one.

In game one I was pretty pleased with the Sharks defensive play, but the offense was feeble. In game two I loved the aggression, intensity, and strength on the puck on offense - but now the defense and goaltending fell apart. Are the two mutually exclusive? Was tonight's offensive power a direct result of the D-men jumping up into the play more, which consequently led to bad odd-man rushes? ARE THESE MY ONLY TWO CHOICES?

If the Sharks can keep up the offensive steam from this game and remember how to play defense and goal, then they can beat anybody. You hear me? ANYBODY.

* = confirmed by impartial Blues and Leafs fans in the Fear the Fin game thread.

** = that sounds familiar. Where have I heard that plan before?