Share All sharing options for: Sharks Gameday: For Reals

What a crappy game on Wednesday, huh? That Steve Ott sure is a jerk, and Ryane Clowe got hit in the throat with a puck. The Sharks played one of their very-concerning off-games, the kind that makes fans panic and wonder if this is the kind of game we are going to see in the playoffs. Marleau was sloppy, Nabokov was weak, and the defense was disjointed and all over the place. 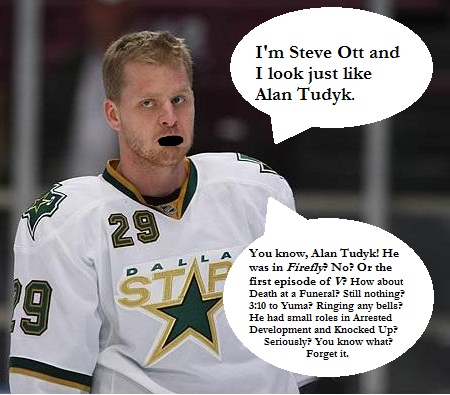 Should we be concerned? Yeah, probably. Post-Olympics, the Sharks have given up five or more goals in four games. It only happened six times* in the five previous months of the season. I'm no mathmagician, but those numbers seem bad.

Sure, even the best teams occasionally have off days and get worked - but for it to happen so often in such a short amount of time right before the playoffs is a sign of a team that just isn't working. Evgeni Nabokov may be tired, some guys may be hurt, but the real problem is that on some nights the entire team looks like they've forgotten the basics of team play. They make awkward passes, don't cover the right guy, and take stupid penalties. And if they keep playing this way, they're doomed.

But on to happier subjects! As Anaheim fans are so pleased to remind us, the regular season doesn't count for a damn thing. Therefore it doesn't really matter that the Sharks stunk up the place in Dallas on Wednesday, because the REAL games are approaching fast. The playoffs are looming on the horizon like a...um...wait, I had something for this...like a loom? Nah, shit, that sucks. I'm sure I'll think of a good simile before I'm done here. Moving on!

In case you missed it in the comments for Earl's post on Wednesday, I present my first-ever BOC cartoon: 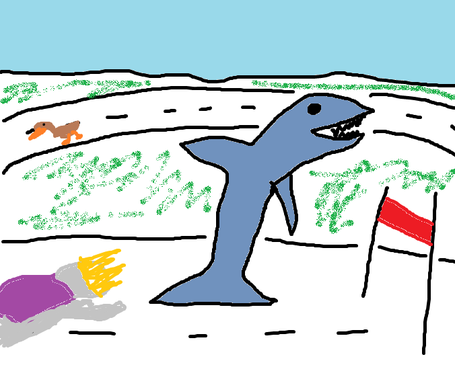 Upon later examination, I seem to have drawn the shark with its normal back fin and then one coming out of its chest or something. I don't know, don't ask me to explain it - the point is that the Sharks are going to cross the finish line first! Woooo!

Despite the team's recent inconsistent play, they'll make the playoffs - quite possibly even winning the division, if they can keep ahead of the Coyotes. When the team started tanking post-Olympics I tried to look on the bright side, thinking that it was good for them to work out the kinks in March, rather than April. But things just seem to be getting kinkier the closer we get to the playoffs. I feel like we're trying to untangle a Slinky here, and prior to the Dallas game it seemed like we were getting somewhere, only to realize that it's even more screwed up than when we started.

Today the team plays the Wild, who are likely to miss the playoffs for the second straight year. This season the teams have played three times, with the Sharks winning all of the match-ups. San Jose just beat Minnesota a few games back, when it seemed like things were starting to go well again - but we could have said the same about Dallas, and we all saw how that turned out. The latest reports say that Clowe shouldn't miss any games, but Thornton will likely be out for the next few. At least tonight's game will feature my favorite player of all time, Owen Nolan. Maybe that's the kind of player the Sharks need right now - some captain worth a damn who will do some yelling when people screw up.

Prediction: Sharks win 2-1 with 2 goals from Marleau Christ just prior to his resurrection this weekend, and Nolan scores from center ice.

Mascot Fight: The Wild, embodied as some sort of generic wildcat/bear thing, gets torn to shreds by a bull shark.

Belated Simile**: "The playoffs loom on the horizon like a wild horse, which must be broken to our will and ridden on to victory."

* = thrice against the Kings! Ack!

** = which is also an awesome band name, by the way. Feel free to use that.