Ducks Gameday -- Good Friday to you, too.

Share All sharing options for: Ducks Gameday -- Good Friday to you, too.

Vancouver Canucks (whatever) at Anaheim Ducks (whatever), 7 pm
Nucks Misconduct and Anaheim Calling --Brian Burke would be so proud.

Not exactly sure what the messed-up backstory is with this cartoon -- I sort of put it together by instinct -- but I do like the result: 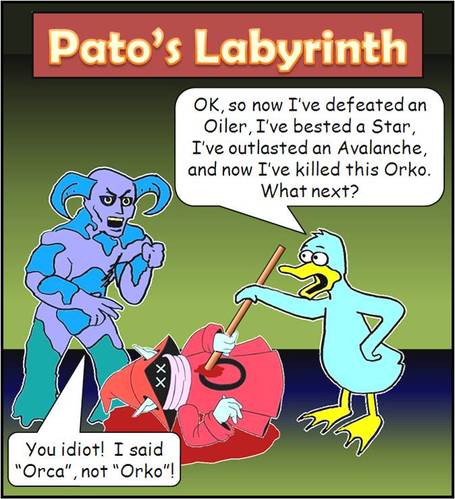 Oops.  He-Man is going to be pissed.

I'm not really sure what my plans are tonight -- I do have siblings in town for Easter weekend, and I'm guessing I probably won't be free at gametime, but we shall see.

In the meantime, who can provide a better case against retirement than Teemu Selanne himself?  Over the past three game win streak, Selanne has a Jari-Kurri-tying 601st goal plus four assists.  He has the primary assist on all three of Anaheim's power play goals over the stretch, and his even-strength line with Saku Koivu and Jason Blake has been money (especially for J-Blake's franchise-record-tying 5-point night on Wednesday, which even featured a J-Blake flubbed breakaway).

Prediction: McElNiño (Arthur's coined nickname for a lineup featuring Nick Bonino and Curtis McElhinney) is now 3-0 without the services of Ryan Getzlaf or Jonas Hiller.  They won their first game by 1 goal, their second game against a better team by 2 goals, and their third game against an even better team by 3 goals.  So obviously, the Ducks lose today -- Canucks game-winner by a vengeful He-Man.