Sharks Gameday: How to Lift a Curse

Share All sharing options for: Sharks Gameday: How to Lift a Curse

Do you believe in curses, bad luck, or evil mojo? Do you think the hockey gods, the ice spirits, or Lord Stanley's bloodthirsty ghost can really be against a team? Well then fear not - I'm here to help.

I don't have much to say about the actual hockey of game three that hasn't already been said - the Sharks played a strong game, did basically everything they needed to in order to get the win, and yet victory still eluded them. Dan Boyle has described the last game as a "nightmare" and Adam Foote admits that the series is "the weirdest" he's ever been a part of - clearly something sinister is going on here. There isn't much more to add about the physical game, so I thought my time would be better spent taking a look at what the Sharks can do metaphysically to try and achieve playoff success.

Thanks to the Internet, we normal-people have access to once-secret information about the paranormal and magical, so I didn't have to look for long before I found handy, practical guides to lifting curses and getting rid of evil spirits. My adventures in psychic warfare on behalf of the San Jose Sharks can be found after the jump.

PART I - BREAKING THE CURSE

Going into this project, I was afraid that I was going to be out of my league. What qualifies me, a humble blogger, to do battle with black magic and curses? Luckily, according to Global Psychics Inc., "'Lifting a curse' is simple physics." Cool, that's a relief. I know a bit about physics, so I'm already off to a good start.

A curse is a set of negatively charged words that attacks us through our lower frequencies, magnifiying and amplifying them to attract more negativity to us... soooooooooooo....... when you raise your vibrational frequencies with happy loving thoughts, random acts of kindness, trust and faith in your ability to deal with whatever comes along, a curse can no longer hurt you.

Damn, I knew I should have paid more attention in high-school - I don't remember any of that from my physics class. Regardless, we have three simple steps here, given to us from a world-renowned psychic corporation, to lift the curse off of the Sharks - so let's get started.

Damn, this is pretty fruity. Okay, here goes. Here are the happiest, most loving hockey thoughts I can think of right now, and I will focus intently on each one for a full minute.

1. I hope no one on either team in the Sharks-Avalanche series suffers any serious injuries. Not even Adam Foote or Darcy Tucker. I release my anger towards all the Avalanche players. They are all good guys just trying to do their best and play their roles for their team. If I met them personally, I'm sure we would be friends.

2. Dan Boyle is a great player and a hard-worker. He's been a tremendous asset for the Sharks and we are lucky to have him. I hope he has an amazing game tonight so he will be able to put all negativity behind him.

3. I'm extremely impressed by the NHL playoffs overall. I don't remember any post-season that's been so unpredictable and exciting in the first week of games. Congratulations to all the teams and players, who have already made these playoffs so great. I'm fortunate to be right here, right now, able to watch and enjoy hockey.

It's so unnatural to think this way...I'm dizzy. But I have to admit, I do feel a little bit happier and more positive. It's working!

This is definitely out-of-step with my usual behavior. I'm much more of a "pre-meditated acts of cruelty" kind of guy. But whatever, Global Psychics Inc. are the experts, not me. Let's do this.

I went to Child's Play, a charity that lets you buy games, toys, and DVDs and have them shipped directly to children's hospitals around the country. I picked Oakland Children's Hospital and browsed through their requested items. A few moments later, I'd completed my purchase - a box of crayons and a DVD of Harry Potter and the Half-Blood Prince. Hell, if that's what the sick children want, that's what they'll get. 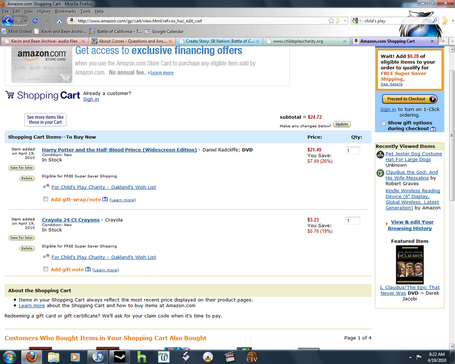 Step 3: Trust and Faith in your Ability to Deal with Whatever Comes Along

This probably applies more to the team than to me personally, so I'll try it that way. Here are some positive affirmations for the Sharks going into tonight's game:

- The Sharks are a very talented, hard-working team. They will prevail tonight and in the series.

- The Sharks played very well in game three, and don't have to make any major adjustments. They can continue playing like they have been, and they will be rewarded.

- Any team that can come back five separate times in a game is a team with heart and determination. They never gave up in game two, and they won't give up in this series.

I've got to admit, this is working. I'm feeling good. Those psychics really know their stuff.

Trust and Faith in your Ability to Deal with Whatever Comes Along - COMPLETE.

The experts in supernatural warfare over at ghostinvestigator.tripod.com  have a detailed explanation of how to banish evil spirits. Apparently there's a recipe that goes along with it, which completely surprised me. See? This is why you do research, folks. Here is the recipe:

That all seems perfectly reasonable to me. I quickly assembled my ingredients: 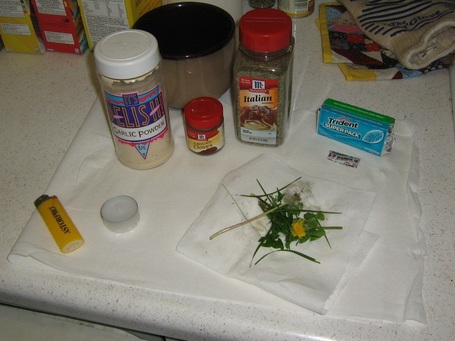 Garlic powder and ground cloves were easy to find. My Italian seasoning has dried sage in it, so that's another check. I didn't have any thistle, which is apparently some sort of weed, so I went outside and picked a dandelion and some other miscellaneous weed things. I'm sure the spirits will appreciate my effort. The peppermint was the toughest part, so I settled on a piece of Trident gum - this way it has the added effect of protecting the Sharks' teeth.

The instructions are designed to purify a house, but that's not exactly what I'm trying to do, so I made some adjustments. I picked the greatest symbol of the team in my possession, a garage-sale-purchased Sharks leather jacket, once my father's and now mine: 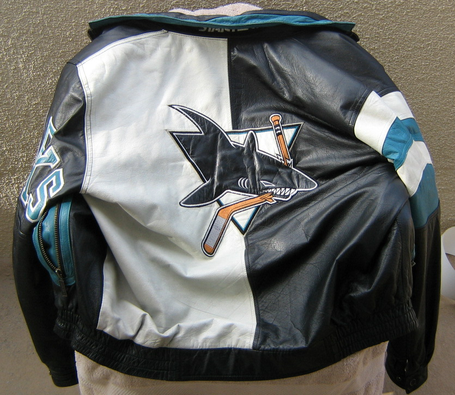 With this as my target and my mind focused on the team, I went on with the ritual. I lit a white candle and then set the mixture of ingredients on fire (with the help of a paper towel, since I couldn't get that stuff to burn worth a damn on its own). I moved the smoke around the jacket while repeating the invocation:

"In the name of the Eternal Lady and Lord
I bid thee part.
I consecrate and clear this team.
Let nothing but joy linger here." 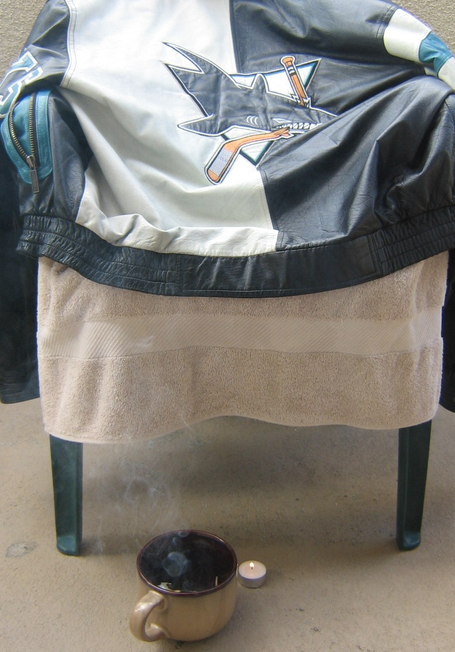 I focused my thoughts on the team and pictured the bad mojo flying away from the jacket, dissipating before the might of the holy smoke. When it was over I concentrated on an image of Marleau smiling awkwardly as he lifted the Stanley Cup over his head. I kept this in my mind while the ingredients smoldered, and then I returned the ash to Mother Earth, as per the instructions.

Alright, that just about wraps it up. I'm thinking loving thoughts about T.J. Galiardi*, I gave a pack of crayons to some sick kids, and my house smells like an Olive Garden burned down inside it. If this doesn't get some bounces going our way, nothing will!

Finally, remember this advice from my psychic friends:

The trick is to break the victim cycle, to take your power back, to believe that a curse can't infect you or anyone around you and not to drop into fear.

Got that everybody? Keep positive, believe in the team, and we will win**!

Prediction: I'll leave the predictions to the psychic experts. I've gained a new respect for those great men and women today. Go Sharks!

* = Not as gay as it sounds, but still pretty gay.

** = And if all this doesn't work, my next post is going to be some serious black magic shit.