Warning: The following post contains graphic depictions of hockey statistics and gratuitous Excel graphs. This post is not intended for pregnant women, the elderly, small children, or those with normal lives. Reader discretion is advised.

Hey, Patrick Marleau, what is your deal?

The curse is over, that much is clear. The Sharks got their win, Joe Pavelski is America's greatest hero, and we have a real series on our hand, devoid of strange bounces or bad mojo. The next couple of games are likely to see the Sharks getting the majority of the scoring chances, which seems to be the natural state of the games between these two teams. Evgeni Nabokov has shown he can definitely hold down the fort when the Avalanche get their chances and guys like Pavelski, Clowe, and Boyle are clearly kicking ass - so the series looks good for the Sharks. Woo!

With our "happy happy joy joy" feelings established, we shouldn't be blind to the issues that do exist - and some players just aren't performing at the level we would expect them to. Joe Thornton is normally the one to suffer the brunt of the "choker" label, but anyone who has watched the last few games has seen that Joe has been a strong presence on the ice and has had some great chances, even if he isn't putting up a ton of points. No one could fairly accuse Thornton of under-performing so far.

Our boy Patrick Marleau, however, is having some real troubles. He's visibly struggling, he's missing the net, he's fanning on the puck, and he's just not playing like he has been all year - and this isn't the first post-season something like this has happened. What's up, Patty?

Let's look at some real numbers (in graph form!) so we know what we are talking about here.

DATA: First I took Patrick Marleau's average points-per-game for each regular season he has been in the league* and compared them to his playoff points-per-game. 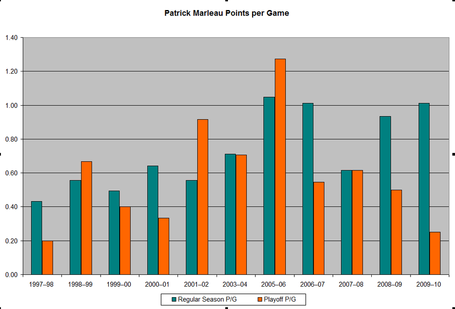 Pretty slick graph, huh?  All sorts of colors and shit - but what does it mean?

Right away we can say it isn't really fair to label Marleau as either a playoff star or dud - he fluctuates wildly. 01-02 and 05-06 were seasons in which his playoff production was a significant improvement over his regular season numbers, but we haven't seen anything close to that since.

However, there is a lot more that needs to be taken into account before we apply the dreaded "choker" label. First, how does Marleau stack up against other players? His regular season points per game for these seasons is 0.73, and for the playoffs it's 0.66 - is this kind of drop in scoring common?

Look out! Another graph is coming for you! 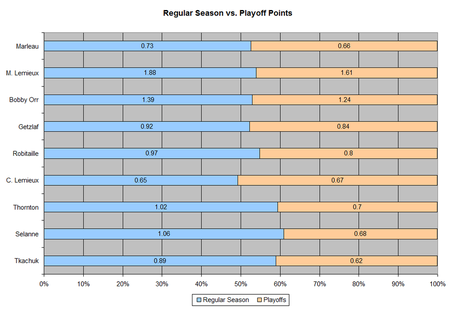 You can't say I didn't warn you about the graphs.

Looking at this, we can see that Marleau's minor playoff drop-off is not really notable, compared to some other well-known players (all suggested by Rudy, so part of the blame for this is on him). It seems typical for a player's regular season numbers to be slightly higher than their playoff totals (except for Claude Lemeuix, who I guess really did do better in the playoffs than the regular season), and Marleau's numbers aren't extraordinary one way or the other. I don't really see what's notable about his performance at all - 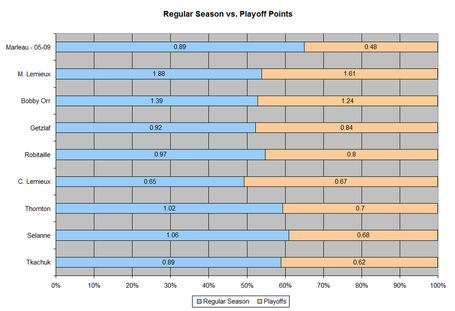 Oh - oh I see. I'm sorry, I didn't realize how serious it was. I shouldn't have made jokes...this isn't a laughing matter.

Damn, now we're on to something. If we narrow Marleau's numbers down to just the previous four seasons, his playoff production is WELL below his regular season numbers - he now has the largest disparity of anyone on our chart. It seems like the Shark fans who have been calling-out Patty for some weak playoffs in recent years may be on to something.

However, there's one more relevant piece of data on this question - how many goals the TEAM scored as a whole. If Marleau's points-per-game drop individually while the rest of the team continues to score, then that's a black mark on him - but if the team as a whole isn't scoring as much in the post-season, then we would expect Marleau's numbers to be lower.

Here's a graph of the percentage of the team's goals that involved Marleau in either a goal or an assist, broken down into regular-season and playoffs. 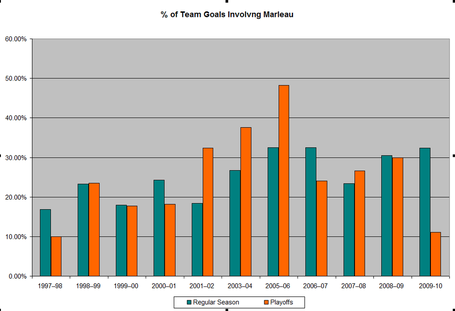 Wow, check out Marleau's run from 01 through 06! Each year he was much more involved in the scoring in the post-season than the regular season - he's Mr. Clutch!

Now let's look specifically at the past few seasons. In 06-07 Marleau had a steep drop-off in points in the post-season (remember our first graph, so very long ago?), but that didn't translate to an equally-severe drop off in his participation in team goals. In other words, Marleau scored fewer points but so did the entire team - he wasn't dramatically weaker in the playoffs. In 07-08, the season Marleau's point production stayed the same into the post-season, his percentage involvement in team scoring was actually slightly higher - meaning he kept scoring at his normal pace when the rest of the team couldn't.

08-09 is the most interesting year to look at for me, and I think it really underscores the importance of this particular statistic. Marleau's point production was cut nearly in half in the playoffs that year, but he still contributed to about the same number of the team's total goals. The team as a whole struggled - not Marleau in particular.

This year something has definitely gone wonky with Patrick - take another look at the chart. So far this post-season, Marleau's contribution to the team goal's has taken the BIGGEST DROP-OFF of his career. Granted, it's only been four games, but what the fuck is that about? He performed better in playoffs in which we later learned he was seriously handicapped by injuries.

I wouldn't be surprised if we eventually learn that Patrick is nursing a serious injury - if you pay attention to his play, he just doesn't look like the same player he was in the regular season. And labels like "soft" or "choker" don't tell us the true story - this post-season so far has been an anomaly, something uncharacteristically bad for our boy Marleau.

It's natural that fans and media would look to Marleau for answers when the team has post-season struggles, since he has been one of the most talented players on the Sharks for many years now. I hope our adventure through the world of statistics will help everyone keep his performance in perspective - and make everyone think twice before applying labels that might make him cry.

A quick note about game four - did anyone else who happened to be watching the CBC feed notice this bit of hilarious racism from their play-by-play guy? He was talking about a play, and referred to "Devin Setoguchi" leading the rush, and then corrected himself, saying, "I'm sorry, I mean Brandon Yip, not Setoguchi."

Dude - they're NOT EVEN WEARING THE SAME COLOR JERSEYS. I'm sure all right wings look alike to you, huh?

Tonight's game will be intense and fun, and I wish it were starting right now.

Prediction: 2-0 Sharks, with goals by Marleau and Pavelski.

* = Astute observers may notice that I left out the 02-03 season. As all good Sharks fans know, this is because this season didn't actually occur - it's only an urban legend used to scare children.