The Sharks will start the second round against Detroit, beginning either tomorrow or Sunday, depending on the results of tonight's game between Washington and Montreal. That's completely insane, but what can you do? So because the Sharks may be playing the Red Wings tomorrow, it's time to discuss what we would like to see from team teal in the series.

The question before us is simple: how do you beat Detroit? The answer seems obvious at first: import more efficient and reliable cars from overseas and allow the manufacturing downturn to slowly destroy the city economically. But, on further examination, this proves to be a poor strategy for a seven-game hockey series - so we'll have to look at some other options. 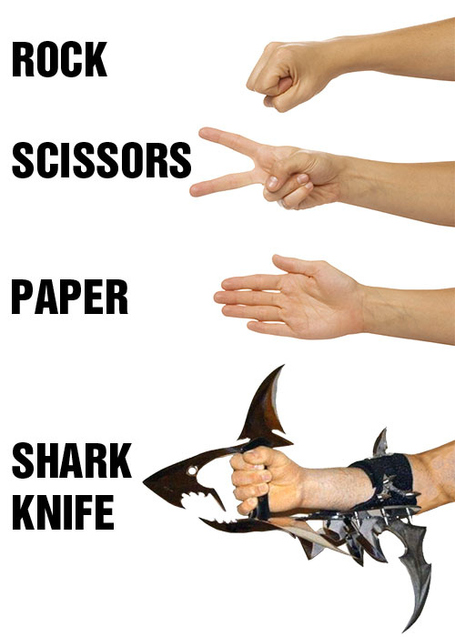 Douglas Murray was right all along - the Sharks need to hit people to win. The Red Wings are coming off a seven-game series and the Sharks have had time to rest - San Jose needs to bring the physical play to make the Wings start feeling the ache deep in their ancient bones. I think comparing the average age and size of teams in the playoffs isn't that useful, but it can be interesting. Doing a quick check, it looks like this:

Average age of San Jose: 28.72 years, the perfect balance of youth and experience.

Average age of Detroit: 29.8 years, which means their blood is practically dust by now. Seriously, these grandpas should be sitting on their porch and complaining about the way kids dress today, not playing hockey!

Okay, the age difference isn't really important at all. It's pretty much the inverse situation that was going on with the Avalanche, and we all remember how that turned out*. How about size?

Average height and weight of San Jose: 6 ft 1, 206 lbs. These men are positively monstrous, able to crush orphanages under their feet.

Yeah those numbers aren't that big of a deal either, but size is more important than age, for sure. Again it's close to the same discrepancy in size the Sharks had over the Avs, and I feel the Sharks' physical play definitely reflected that in round one. The problem is that the Red Wings are a MUCH better team than Colorado, and it will not be anywhere near as easy to push them around.

Point 2: Get to Howard

Jimmy Howard, half-man half-duck, was a great goalie in the regular season. In the playoffs so far, he has been just okay. Here are the playoff numbers for Nabokov and Howard:

Nabby clearly has the better numbers, but Howard's are respectable. At times in the Phoenix series, however, he seemed rattled and soft. With a bigger, more aggressive, and supremely-talented team like the Sharks taking shots at him and getting in his face, I think we'll see more cracks appear in Jimmy's armor.

Please, dear god, don't let this take a wasted game to figure out: SHOOT FROM SHARP ANGLES, GET IN HIS FACE, AND GO FOR GARBAGE GOALS. Seriously, it's like every series the Sharks forget what to do to get to a goalie, and so a guy like Craig Anderson starts looking like some incredible hall-of-fame superstar. The Sharks need to come out hard right from game one, put a few past Howard, and take hold of this series.

An early problem in the series with Colorado was odd-man rushes and defensive breakdowns by the Sharks. The started to correct this towards the end of the first round, but it was still something that popped up occasionally. Against the Red Wings, these kinds of mistakes will mean death. The Sharks need to keep in position and the forwards need to be ready to come back and support the defense if the play starts going the other way.

Again, the fact that this was a problem in the first few games against the Avalanche and then was mostly corrected is encouraging. The Sharks have learned their lesson and should not repeat the same mistakes.

Series Prediction: There's no curse anymore, so the Sharks can win this series with hard work and talent. It will be tougher than Colorado, but the Sharks will get it done. SHARKS IN 6.

* = if you do not recall the series with the Avalanche, you should probably schedule a brain-scan with your doctor.