The BoC Quest for the Cup, Chapter 2: The Meddling Octopus

Share All sharing options for: The BoC Quest for the Cup, Chapter 2: The Meddling Octopus

Note: I don't really want to over-post on Meg's gameday post below, but the quick turnaround between playoff rounds didn't give me much time to put this post together, and I wanted to publish it before the series started.  I went back to kid's literature style for this one -- seems to be working lately -- and it might be a nice way to pass the last few hours until puck drop.  I won't even be around to watch the game tonight, so use Meg's post for game comments -- play nice!

The BoC Quest for the Cup
Chapter 2: The Meddling Octopus
Link to Chapter 1

Once upon a time, way back in 1994, a baby Shark was out on his first hunting expedition.  He wasn't very experienced, so not knowing the ways of the ocean he went straight after the toughest creature in the water -- a powerful Octopus.  The Shark was outmatched by the eight-legged invertebrate, but luck was on his side; the Octopus wasn't paying attention to the small fish, and with his baby teeth the Shark managed a lethal bite to the Octopus' jugular.  The fortunate youngster had managed his first kill. 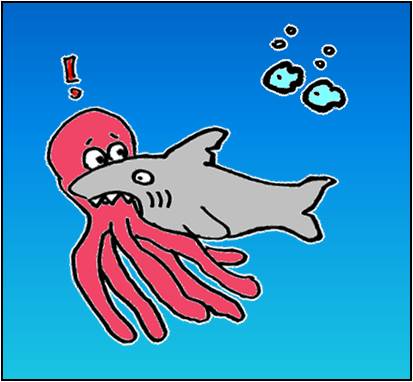 The Octopus was enraged by the humiliation by the upstart fish, and swore a lifelong oath of vengeance against the Shark and any of his known associates.  The following hunting season, the Octopus unearthed the powerful Broomstick of Terror, a mystical artifact of unimaginable power.  Armed with the weapon, the Octopus became unstoppable, and his vengeance knew no bounds. 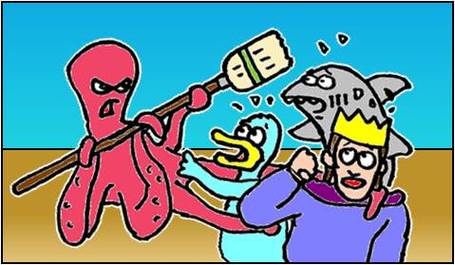 In 1995 he performed a Sweep Kill on the young Shark to remind the young fish of his place in the ocean's pecking order.  In 1997 and 1999 the Octopus swept a young Duck that had been seen hanging out with the Shark.  In 2000 the Octopus then swept a King who happened to live in the Shark's neighborhood.  And in 2001, the Octopus prepared to Sweep Kill the King again, except...

This time, the King was ready.  The clever King allowed the Octopus to get halfway through his sweeping motion, then shocked the beast by thrusting his sword through its heart.  Normally, the magic of the broomstick would have deflected the King's blow, but the King had acquired this special blade in the deeps of the Dead Marsh -- it too had special powers.  The victory was costly for the King, though -- it would prove his last victory for a long, long while.  Satisfied with his sacrifice, the King took the broomstick back to his castle in California and vowed that it would never be used again. 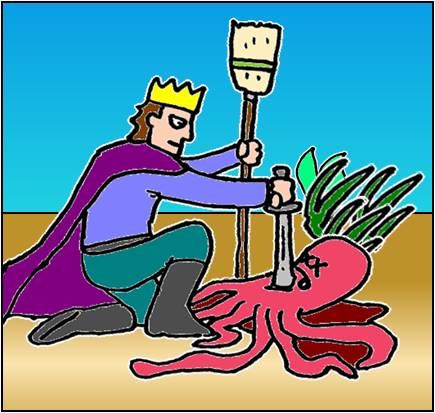 Sadly, that promise wouldn't be kept for very long.  The Duck, still harboring his own resentment towards his previous encounters with the Octopus, broke into the King's vault and stole the magic broomstick.  In 2003, he unveiled the weapon and turned the tables on the Octopus, who didn't even know the weapon still existed.  The Octopus was swept and humiliated.  The Duck would use the broomstick a few more times in the following years on other victims before it shattered; nowadays only shards of it remain, and sweep-kills are a much rarer event. 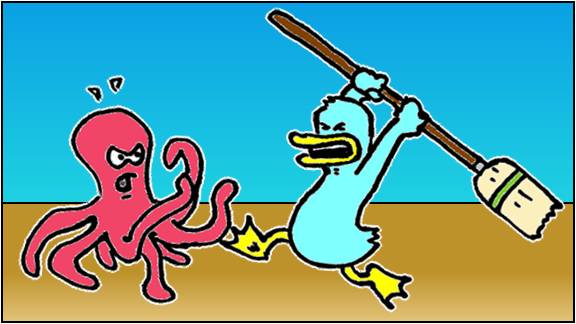 The Octopus spent the next few years avoiding contact with the Duck, King, and Shark, but never stopped plotting his revenge.  In 2007 he finally used a new two-armed choking technique on the now-fully-grown Shark and strangled it to a slow and painful death.  Bolstered by that success, he next turned to do it to the Duck, and it nearly worked.  The Duck was less than a minute away from blacking out when he caught a lucky break -- the Octopus lost his footing and the tables were turned; the Duck survived unscathed. 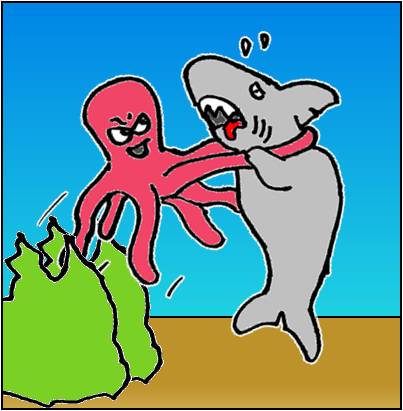 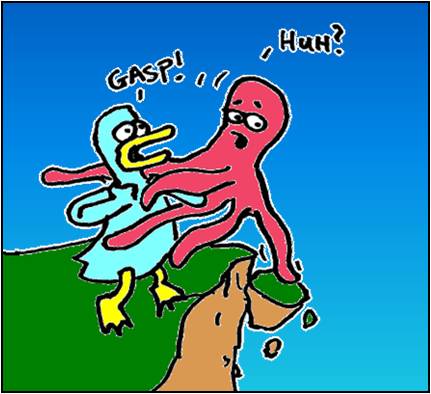 Two years later the Octopus got another opportunity at strangling the lucky Duck, and this time he was finally successful -- his first Duck kill in a decade.  The Duck put up a stronger fight than the Octopus was anticipating, though, and the drawn-out struggle sapped the Octopus of most of its energy.  He was too exhausted to defend himself by the time a vengeful Penguin showed up looking for its own helping of octopal revenge. 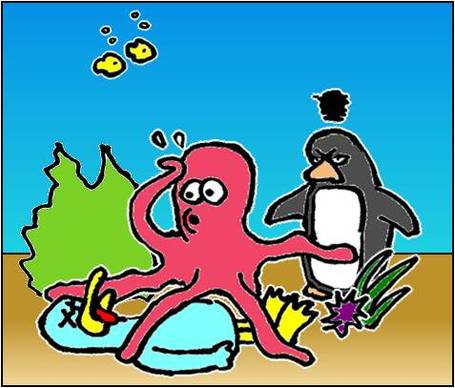 Though the Duck and the King each had some measure of revenge against the meddling Octopus over the years, the angry Shark hadn't tasted Octopus blood since his first hunting swim of 1994.  Since then, the Octopus had twice avenged the baby Shark's lucky kill, and finally the grown-up Shark decided it was time to show the Octopus once and for all what a fully-grown deadly Shark was capable of.  In 2010 they squared off for one last battle. 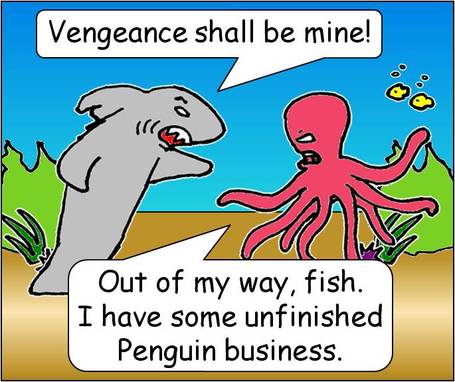 And once again, here's the part where the story really gets interesting...

So you don't have to go look it up, here is the list of series between BoC teams and that Meddling Octopus -- ten rounds since that first young sharkbite in 1994:

Overall, the Red Wings are 6-4 in series against BoC teams, which sounds one-sided, especially when you consider the four straight sweeps.  But considering how dominant Detroit has been overall during that stretch (since 1994, the Wings have a whopping 24-7 series record against non-BoC opponents), BoC has a comparatively very good record.  Only eight franchises have eliminated the Red Wings since 1994, and BoC represents three of them.  And besides, tonight will be the first time in eleven occurrences that a BoC/Wings series starts on the west coast -- that'll be a new twist.

Definitely  from a BoC perspective, that damn meddling Octopus has been a persistent source of frustration and confrontation.  But nowadays Drama Drive seems more a two-way street; BoC has taken 3 of the last 5 encounters.  Who knows?  Even as we speak, Octopus fans might now be muttering about that damn meddling BoC.  :)