(Earl and Rudy are going to make a mess of the place around here tomorrow with their So-Cal Suck-a-thon, so I'll get my superior post up now to give everyone time to read it in peace before those two ruin everything.)

So the Sharks lost again. It sucked. Yeah, they battled back and got to OT, but it sure didn't feel like a moral victory to me. I've spent the past hour re-watching each Avalanche goal and trying to figure out what the hell went wrong, and I will present my findings to you below. In short, the Sharks' D is looking old, slow, and stupid a lot of the time - even the young guys like Vlasic! The forwards are a little better, but they too aren't hustling to get back when they need to - for long stretches of the game, the team just looks lazy and over-matched.

Do guys have injuries that we don't know about? Probably.

Do any excuses matter in the playoffs? Nope.

What follows is my breakdown of how each Colorado goal occurred, the excuse that could be offered for it, and the reason that excuse isn't acceptable at this time of the season.

Colorado Goal 1: Vlasic fumbles the puck on the tail-end of the power-play. Kyle Quincy gets a breakaway out of the box and scores.

Excuse: Sometimes the puck just hops over your stick - it could happen to anyone.

Yeah, but still: Vlasic made a bunch of bad moves in this game.

Colorado Goal 2: A bad line-change leads to a 2 on 1, and Peter Mueller (pre-concussion) puts a good shot past Nabokov. Douglas Murray, Dany Heatley, and Ryane Clowe all got tied-up at the blue-line.

Excuse: The players thought they had more time.

Yeah, but still: This was a shitty goal. Nobody was hustling to get where they needed to be. This is the goal I'm most upset about.

Colorado Goal 3: The Sharks' top line gets caught down low in the offensive zone, and a quick turn-around leads to a 3 on 2.

Excuse: Todd McLellan's system sometimes leads to situations like this, where pressing hard on the attack leads to an odd-man rush, especially against quick teams like the Avalanche.

Yeah, but still: Kent Huskins looked lame, slow, and confused, and let Mueller get an uncontested shot between the hash-marks. Nabokov could have really helped out with a big save to keep the game tied.

Colorado Goal 4: On the power-play, Colorado used speed to follow-up on a rebound and Paul Stastny put the puck home.

Excuse: Colorado executed their power-play well and outnumbered the Sharks.

Yeah, but still: Rob Blake got worked, and Nabokov misread where the puck was going - he wasn't hugging the post like he should have been.

Colorado Goal 5: In OT, the Avs throw it at the net. It changes direction and it goes in.

Yeah, but still: Nabokov could have stopped it.

Ugh. Going over all those goals was not a pleasant experience. Watching the replays over and over really gives you a clear view of the problems the Sharks are having. What's most troubling is that the team has to know what we know - they're aware of the mistakes they're making, and what they need to do to fix it. So then why is everything still going wrong? Maybe it's not something they can just correct - maybe it just isn't possible to tell Blake and Huskins to "not be so slow all the time." Maybe they're just wearing out at the worst possible moment.

Or maybe, like Shark fans tend to do, I'm just taking a few rough breaks and imagining that it's some epic disaster. It's possible. These last few games should give the Sharks a chance to put things right, because the playoffs are no time to be asking these kinds of questions.

Tuesday night the team plays the Flames, a possible first-round opponent. Most in Shark-world would like to avoid Calgary in the opening round, but after the embarrassment against Colorado I'm not so sure I agree. The Sharks' current woes all seem to stem from their lack of hustle and slow reactions on D, things which a speedy, high-scoring team like Colorado is perfectly poised to exploit. A more methodical, defense-oriented team like Calgary (27th in the league in goals per game!) could give the Sharks the necessary time to get their heads straight. Miikka Kiprusoff is a stellar goalie and could certainly give the Sharks some problems - but I'll take a slow, gritty defensive duel over the score-fest we saw in Colorado.

The Sharks need to address their defensive game to avoid embarrassing themselves in the playoffs. Let's hope we see some signs of that happening against the Flames.

Prediction: Sharks get a solid team effort and a 2-0 win. Blake isn't suspended and scores, as does Huskins (or if not him, then Slappy).

Mascot Fight: Flames are utterly useless against the Sharks, obviously.

Slappy: Is ready for the playoffs. Are the Sharks? 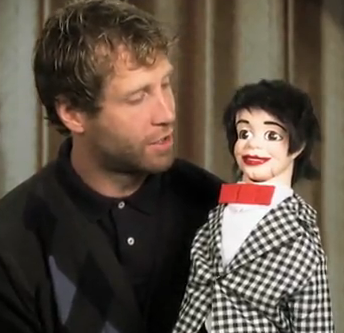