Los Angeles Kings (whatever) at Anaheim Ducks (whatever), 7 pm
Jewels From the Crown and Anaheim Calling -- what the fuck are you waiting for?

Well, today is most likely the day where Anaheim's silly playoff glimmer gets destroyed -- it's more like a technicality at this point, because the Ducks have been virtually dead most of the season, plus any of the following puts 8th place permanently out of Anaheim's reach, even if the Ducks ended 4-0-0:

I haven't checked the math that rigorously, so feel free to correct me in the comments.  Regardless, though, if the Kings win in regulation today, it's definitely officially over.  Thus today's medical-dilemma cartoon: 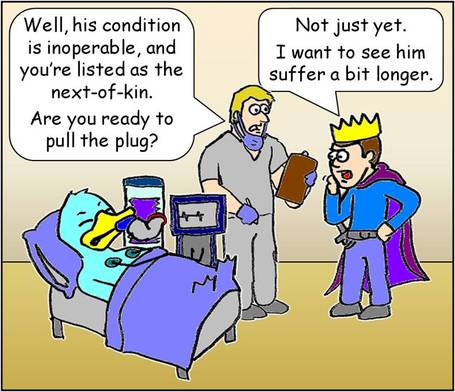 Apologies to all our readers who are in comas.

At any rate, it's time to talk a bit about the bet Rudy and I made before the season started:

The terms of the bet?  Simple, yet devastating: sig change.  If I win, Earl has to change his signature to something embarrassing for the entire off-season.  If Earl doesn't lose, I have to change my sig to something like, "The only things smoother than Corey Perry's skating skills are his balls on my chin."

So you have an example to work with already.  I guess ideally, we'd like to start collecting some solid nominations today, and once we get enough traction on some good entries we can settle it all with a poll sometime between playoff rounds.  Or something like that -- as always, we're figuring this all out as we go along.

My only real request: control the surface vulgarity a bit -- that one's not so much for our strict language standards at this fucking shitbomb known as BoC, but I do comment around at other SBN sites from time to time, and I'd like to not be banned outright for my sig.  Yesterday I commented at Copper & Blue and at From the Rink -- I'd like to keep those options open, at least until my actual comment content gets me banned there.

But fundamentally, today's the day you get to answer the question: "What would you like to see Earl end every comment with this offseason?" or even possibly "What could make him shut up more often?"  Be as mean or clever as you'd like in the comments -- heck, maybe even suggest an image pic; I'm kind of gullible -- should be a blast.

And now it's time for a Spade-in-Victorhell contribution, always a welcome surprise: 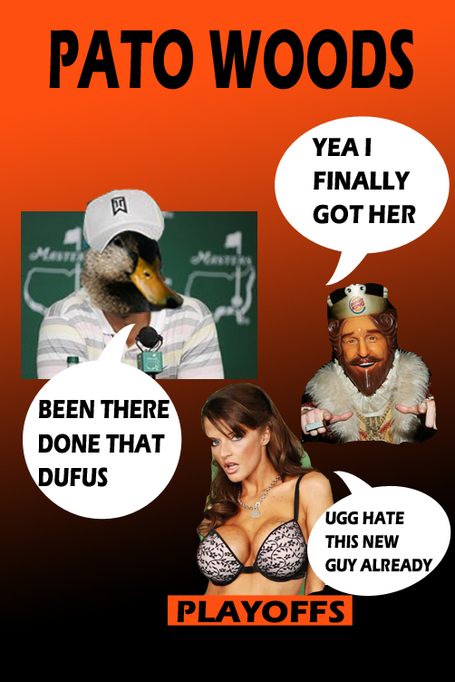 I'm bad at non-hockey; Spade did have to point out to me that this is (one of?) Tiger's mistress(es).

Prediction: I'll be around for game comments tonight (maybe in Rudy's post).  Ducks win, perhaps?  This one's really up to the Kings -- will they pull the plug tonight?