Over the past ten playoffs, dating back to 1999, the Dallas Stars and the Anaheim (sometimes Mighty) Ducks have enjoyed similar playoff resumes -- each franchise has won its first Stanley Cup, plus has managed to be eliminated in each round -- they've paid their postseason dues.  But now it's time for these teams to face the reaper -- the Ducks and Stars are the only Pacific Division teams that won't participate in this year's playoffs. 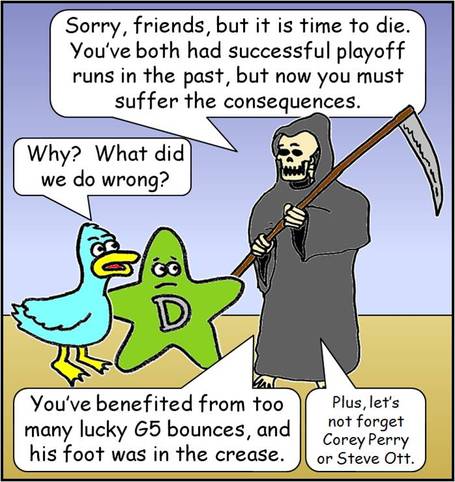 Don't worry -- I'm sure Perry and Ott can anchor a superdouche line at the Worlds or something.

Holy youth movement, Batman!  No Ryan Getzlaf, no Teemu Selanne, no Saku Koivu, no Scott Niedermayer, no Lubomir Visnovsky, and no Todd Marchant (and what the heck, no Joffrey Lupul either) for today's game in Dallas or tomorrow's game in St. Louis.  It's a kid's road trip -- break out the Big League Chew!  Unfortunately, there's no Earl Sleek either; real life will prevent me from watching/commenting on either game, but have fun -- go DVR!

Now it does strike me as sort of odd that if there are really three games remaining in the Anaheim careers of the supertrio of Niedermayer, Selanne, and Koivu, why would they sit for two of them?  Unless, of course, if they're attending some secret meeting about keeping the band together for one more year.  I'm willing to hear conspiracy theories in the comments -- who do you think returns next fall?

Prediction: Corey Perry gets assigned the temporary captaincy and the universe explodes.  Nice knowing y'all.