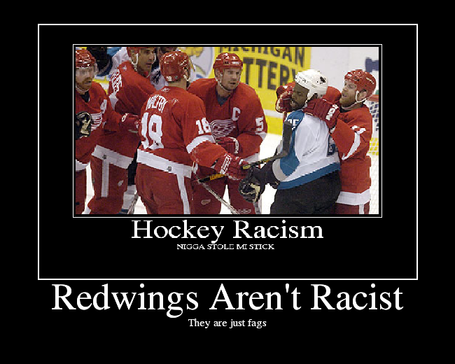 Mike Babcock: Alright boys, last game's effort was disgraceful!  We lost to a team of losers!  What were we thinking?  They're all minorities!  C'mon!

Justin Abdelkader: I dunno, Coach, they were pretty goo-

Babcock: C'mon, they were terrible!  Everyone knows how bad those other races are at hockey!  I mean, let's review that team.  Joe Pavelski: Polack.  Obviously the way we beat him is by getting him admitted to a UC school!  Those Poles are so obsessed with education he'll won't be able to concentrate on the game!

Babcock: And Devin Setoguchi!  He's so stupid, lazy and uneducated!  The only thing that boy has going for him is his large cock!

Nicklas Lidstrom: Coach, none of the things you are saying are making sense.

Babcock: Durpa durpa durpa, that's all I hear!  And another thing: Evgeni Nabokov?  How the hell are we getting stopped by an illegal immigrant???  He should be making us tortillas, not stopping our pucks!

Babcock: Exactly!  Tell him to go bomb another government building or something!

Babcock: Right, Dats!  You're a good ol' boy, just like me.  Now let's get out there and show them what Canadians can do!

(Editor's Note: This is the worst thing Rudy's ever written.)