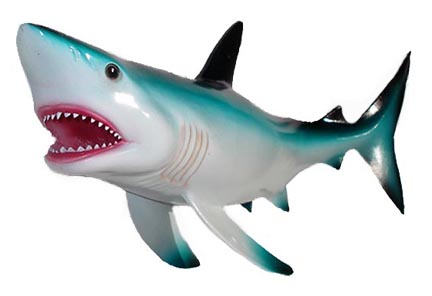 One time when I was in school I got my hands on a really old science book in the library. It was geared towards kids and featured a lot of random factoids on every page, and I think it was from the 30s or 40s. I remember turning to the page about sharks and being fascinated by what I found. From this book I learned that:

3. Sharks are one of the only animals that cannot get cancer.

Now that I am older and wiser and have spent years reading grown-up science books and watching Shark Week, I realize that these claims are likely bullshit. First, sharks don't sleep the way we do, but still have restful periods. Second, sharks feel full just like other animals. And third, well, actually, sharks are pretty fucking awesome when it comes to cancer and other diseases like AIDS, and in the future we may all be protecting ourselves from illness by being genetically engineered to be part shark, as seen in the following scientific diagram: 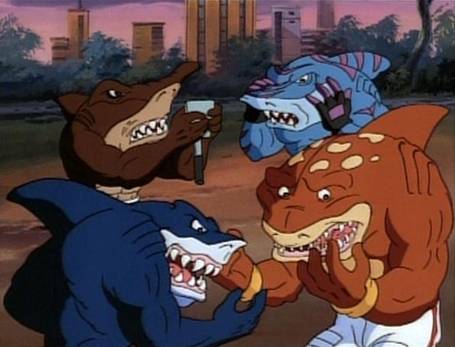 When you are a child you have simplistic perceptions of things. Reading those science-lies in that book as a kid shaped my idea of what a shark was: a never-sleeping, always-hungry murderous monster that couldn't be stopped by any illness known to man. Sharks were on the same level as dragons and Sasquatches, only they were better because unlike dragons they were REAL.

As I grew up and real facts about sharks replaced childish fantasies, they became less magical, but even more interesting. As an adult I can appreciate them on many different levels. Knowing how endangered and vulnerable sharks can be makes it all the more amazing how god-damned COOL they are. My grown-up thoughts about sharks are more complex, and more grounded in reality, and therefore are much more meaningful. Sharks rule.

Generalizing from myself, I think that all kids who start watching a sport idolize their team, and imagine the players as gods among men. The team you root for is always perfect, and should always win, and even when they lose they are the best. Nothing can ever hurt them and nothing can ever stop them, no matter how injury-riddled or shitty the team actually is.

As you mature and pay more attention to things, however, you start to see the team for what it really is: a group of guys who are just people, like you, only they're really good at hockey. The players on your team make mistakes, do bad things, and sometimes just aren't as good as the other players. As your picture of what your team really is made of changes, your appreciation becomes deeper. It's meaningless for a perfect team of superheroes to win a sporting event - that's what is expected. But to watch a group of guys struggle with mistakes, injuries, and adversity to reach their goal together after being doubted by so many for so long...that's something special.

I picked a really crappy time to move. I was without Internet or TV for all of Saturday, and so my experience of the game was looking at my lousy cellphone every two minutes when the Yahoo Sports boxscore updated. I felt like I was in the 1830s.

After the game was over, as is my custom, I called my dad. He still lives in the Bay Area (smart guy) and was watching the post-game interviews. He held the phone up to the TV so I could listen to Joe Thornton talk about how great it felt to win.

You know what? It did feel great.